- January 26, 2009
Sometimes I think a compromise can leave you feeling a little like you gave too much up, that you settled for less than you should have. I feared I may feel like this when I decided to knit a plain foot on my Poms. I'd been wanting to knit this pattern for so long could I really make do with just a patterned leg? Would it look like I couldn't stand the heat in the Pomatomus kitchen? Would it lose the joy of the original pattern to cut it off at the ankle? 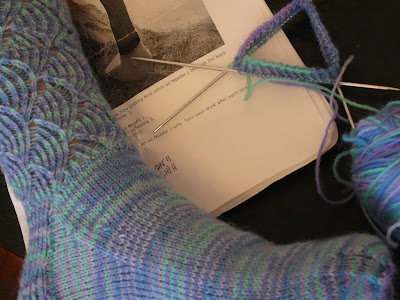 Happily I love the way this looks; sure I could take the all over patterning if someone else was doing the knitting - one of the great features of many Cookie A patterns is the seamless flow of the patterning across the sock. However, for me, given where the foot of a sock normally ends up I can feel content with taking the easy way on these.

I'd got stuck at the end of the leg on this first of the pair and was not feeling inspired to press on even with the deliciousness of the heel to come. I liked the look of the pattern as it emerged from the needles but I never clicked with the rhythm of knitting it and a patterned 1x1 rib is a slow plod if you're not in the swing of it. I knew I wanted to make the socks, I knew ripping out all that work would hurt more than knitting on but I also need to enjoy my knits. There's enough in life that is not all fun and frolics without bringing plodding to the knits.

Eventually I had to get on with the heel as my mitts were knit and I'd deliberately only taken the Poms with me on my trip home. Aren't I cruel to my inner knitter sometimes? I kept hoping that once I picked them up again there would be a spring in the stitches but I still wasn't feeling it as I knit the heel flap. In the end inspiration came from my Mama who suggested the rather obvious idea of just not patterning the foot. Suddenly I had some simple knit, knit, knitting to swing along on and then just the much more manageable prospect of one leg more of the pattern to go. Half-Poms, sock one completed and sock two cast on. A happy compromise as this way I should actually get some of the great Pom patterning on an FO. Sometimes less really is more.
yarnery

Bells said…
Oh how I wish I had thought of this. I have my own Poms story to tell and though I have made it part way down the foot, I'm wishing I'd stopped. I actually like to wear plain footed socks mostly.

Rose Red said…
You have to feel the love really don't you! sometimes I wonder why I persevered with knitting projects I'm not loving - and mostly it's because they are for gifts. If I'm not loving something for me, I stop doing it - or change - like you did - a most excellent compromise!
26 January 2009 at 09:55:00 GMT

florencemary said…
Hurrah for mamas! I think the socks look great with a plain foot. I have the Pom fingerless mitts in my queue, which I will get to eventually (sock knitting is still out of favour chez moi).
26 January 2009 at 11:48:00 GMT

Kelly said…
Great idea - I think they look quite nice. They'll probably wear better than if they were all-over pattern too, as the stockinette foot is smoother and sturdier. I haven't tried that pattern yet, but this is an interesting alternative!
28 January 2009 at 01:21:00 GMT

Rachel said…
I think you made an excellent choice. Especially if you didn't think you would finish them with all that work already put into it! They look great with the solid foot--good luck with the second leg!

Anonymous said…
I like these! Very cute. :) I also find that texture/lace on the foot of the sock always ends up looking ratty and pilly, so I think it was a good idea to make it plain.
29 January 2009 at 15:30:00 GMT

Anonymous said…
Such lovely socks, the yarn is a fab colour. Knitting socks looks so much fun, I think I ma going to have a go! Once I have finished procrastinating over my current project that is!
30 January 2009 at 09:07:00 GMT

Anonymous said…
I think this is a great compromise. I love how the poms looks, but I really did not enjoy all that 1x1 ribbing into the back of the stitch. Good for you!
1 February 2009 at 11:51:00 GMT