- January 21, 2009
Having resolved to knit more sweaters this year it seems only appropriate to kick the year off with knitting accessories. The equivalent of scoffing down the chocolate eclairs when you've resolved to diet. Better for the waistline though.
Pattern: Urchin
Yarn: Knitglobal Shetland Flame - shade Sherbet, 1 skein
Needles: 7mm plastic straights
Started: 9 January 2009
Finished: 18 January 2009 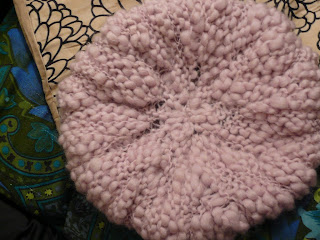 A looming birthday convinced me to make another of these super quick to knit hats; I wanted an excuse to get the yarn used in one of the versions photographed for the pattern as I really love how much the texture mimics that of a sea urchin shell. In my first version with a yarn with consistent thickness there isn't all that much of the sea about it. 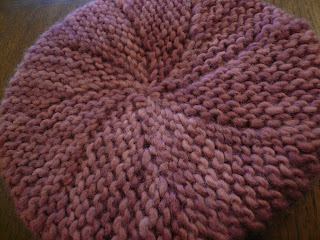 It's a great beret but not quite so magical as that soft pink cap Ysolda looks so sweet in. Knit in the Shetland Flame yarn the hat seems to have grown in some mysterious, under the sea way. 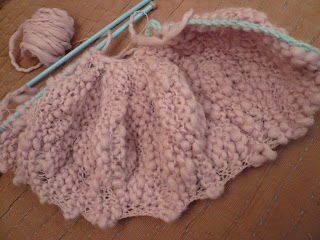 Instead it grows in a mysterious, knitting is magic way. Knit in a yarn with a consistent thickness the construction is a little more obvious as the wedge shapes are more distinct in the FO, though I doubt that had I been handed the hat and no pattern I'd have worked out the construction. I'd not knit any side to side hats before and I wouldn't have thought knitting on straight needles could have produced a seamless beret. The first time of knitting definitely felt like a return to my early days of the craft when every thing I knit required some blind faith following of the pattern. 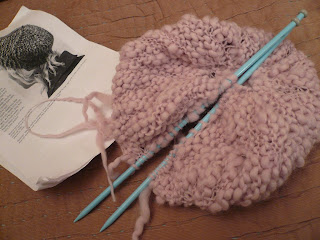 As you finish up the final wedge, pick up the live stitches from the provisional cast on and bring the two needles together for grafting the faith is rewarded and a beret appears from an amorphous schlomph of knitting. This is an all round good egg of a gift knit - the interesting construction adds a little frisson to the very quick and straightforward knitting and it creates a beautiful wearable item.
made by me

dreamcatcher said…
I love the texture of the Shetland Flame, it really adds a special something to this pattern!
21 January 2009 at 16:13:00 GMT

Marianne said…
I don't usually go for those 'thick thin' yarns but wow, I'm having to rethink all that because I am really lovin' the looks of that beret!
Thank you!
21 January 2009 at 16:38:00 GMT

Amanda said…
How very clever! The yarn is really lovely.

btw...I too find that as soon as I declare my knitting intentions on my blog I get a really strong urge to do the complete opposite within hors of posting!
22 January 2009 at 13:44:00 GMT

Terby said…
Great hat. I think that's the best use of thick and think yarn I've ever seen. Interesting to really see how the texture makes a difference with that pattern.
25 January 2009 at 23:13:00 GMT