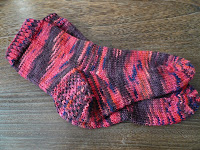 The Fiery Socks are all done and what could be better for keeping my beloved's toes toasty in the current cold snap? Purty yarn and a simple (sock equivalent of a garter stitch scarf) pattern mean they were finished quick smart.

The rich colourway made these a natural choice for my Project Spectrum 'Fire' project though I had nearly put this skein aside to send to Ambermoggie for her Hospice Socks project until the beloved suggested I might use it for socks for him. Ah the boyf request - so hard to resist! We struck a deal, I have knit these for him and he is making a donation to the hospice. 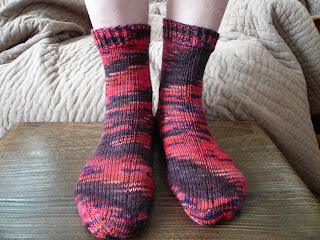 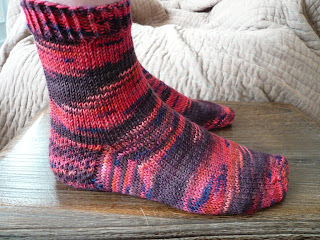 Notes: I'm reasonably happy with the finished socks - love the heel - but if I had spent a little more time preparing and a little less time fretting about whether there would be enough yarn I could have got a better pair in terms of density of fabric and leg length.

Jitterbug is the loveliest feeling of all the sock yarns I have knit with - very springy - and the intense colours are magical but I am scared about the length per skein. I've read a ton of similar worries out in blogland and I wouldn't have used it for a pair of man socks if it weren't for the irresistible request factor.

Having decided to go for it, I did just that and grabbed at the biggest size needles I thought I could get away with and cast on a reasonable number less than normal stitches - that impulse to just knit - so strong one side of the project and so inexplicable the other. I think this would qualify for the Fast and Wrong section on the much missed Knitty D and the City podcast.

I could have just measured the beloved's surprisingly skinny ankles and worked out my gauge and I think I would easily have got a pair out on smaller needles with a slightly longer leg, invisible joins between the dpns and a firmer fabric. These are fine but when you have this amount of yarn left at the end it is somewhat galling. 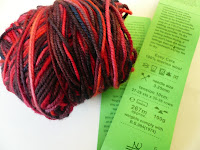 I tread a confused path of reading all that is out there and trying to be prepared but then choosing a dubious way to put the knowledge to work - ie the way that gets me to the knitting quickest. I think I may have done better with these if I'd never read a word on the subject of shorty shorty skeins and just looked at the ball band - though in all likelihood I would have then ignored that - I mean the 3.75mm needles were downstairs with me and the 3.25mm ones all the way upstairs.

Glenna took the opposite approach to me in terms of sensible preparation for the use of Jitterbug (I like how it sounds dangerous, as if you should only handle while wearing gloves). If you are a lazy gal like me I think when all is said and blogged if you stick with the 3.25mm needles recommended on the ball band you can get a reasonable size pair of socks out of Jitterbug. Or you can send it all to me and I will knit only socks for me from it as there was plenty for my Esthers :o)

Anyway on to the important stuff - the closing date for coming up with a pattern for my Fast and Wrong yarn purchase, the Fishermans, was yesterday and thank you so much to all the entrants for great ideas. While I love the shawls that were entered(moths to flames indeed Kath, I think it was the haze from the smoke that caused me to buy this in the first place!) I choose Clarabelle to receive the yarn for suggesting both this cute little dress pattern and this fab scarf pattern that jumped straight into my Ravelry queue (never fear I have plenty of alternative yarns to make this with). Congratulations Clarabelle. 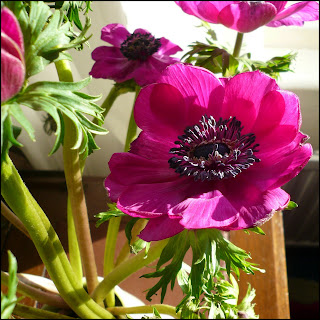 PS photo courtesy of my Valentine Anemones
made by me yarnery

florencemary said…
Thank you so much, Sarah - I'm thrilled! The dress pattern has even been met with approval by my hard-nosed daughters! You will see a 'Fisherman-granddaughter-dress' featured on my blog in due course!
17 February 2008 at 18:56:00 GMT

Rose Red said…
Socks look great! I used Jitterbug for socks for my MIL - who fortunately has small feet and skinny legs, so I got away with 2.75mm dpns. And a liberal use of my digital scales to keep track of how much yarn I had left as I was knitting!
17 February 2008 at 21:33:00 GMT

Bells said…
the colour of those socks is amazing. Really eye catching. I've never done socks on needles of that size. I bet they would knit up fast.

Donna said…
Maybe you could split the yarn into two equal weight balls and then knit toe-up until the yarn ran out?
18 February 2008 at 11:35:00 GMT

Linda said…
Well done Clarabelle! Those flowers are gorgeous. The socks are good too, I like the way the colours went.
18 February 2008 at 16:20:00 GMT

Suzie Sews At DOTTY RED said…
Oh wow, amazing socks...but lots of scary talk about the heel and measuring etc...far to complicated for me!!! love the colours, vibrant. I will tackle socks one day!!!
19 February 2008 at 09:52:00 GMT

raining sheep said…
Great socks! I am in the process of knitting my BF some socks in an awesome khaki green from ShiBui...I love the heel on yours, but am not ready to give that a try yet...maybe my next socks.
19 February 2008 at 21:10:00 GMT

Curly Cable said…
Fantastic socks Sarah, What a super colourway, not surprising your boyfriend bagged it for himself and I love the eye of the partridge heel! I'm with you on the frustrations of having oddments of sock yarn left over.