Pattern: Sophie
Yarn: Sirdar Bonus Flash DK - Peacock - glad of the strength of this as I pulled and pulled at it to knit around the stuffing for the head without leaving great ladders between the dpns - used about a ball
Needles: 3.5mm Bamboo DPNs
Started: 15 February 2008
Finished: 24 February 2008
Notes: Loved knitting it once I was past the cast on where whilst wrestling the dpns I feared it might go the way of Clarabelle's Woodins. 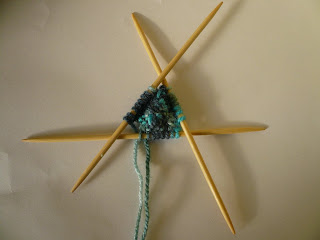 My cast on didn't entirely disappear as it should and I confess I thought I was starting at the nose so would be able to hide it with embroidery but you actually start at the back of the head. I'm happy enough with it and I don't think that little Elsa (one today) will mind too much. I took the tip to use a crochet hook to pick up the stitches and found that worked really well; there are fiddly moments after each body part pick up (urgh sounds dodgy!!) but enough plain knitting to be quite soothing and watching the little creature grow is much fun indeed. I packed in the stuffing to get a good firm rabbit which I think was well worth it. The pattern is very well set out and easy to follow. Loved having no ends to sew in at the finish.
Modifications: Just the addition of a little pompom tail :o) 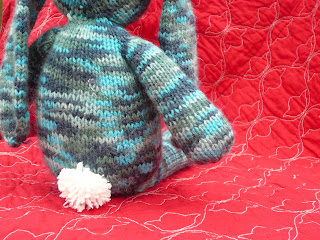 A different kind of pink flower as my PS today 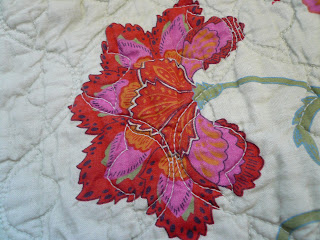 florencemary said…
Elsa's a darling! Definitely not a Woodin (you know, I suspect that my dumped Woodin has returned to haunt me in the form of The Evil Squirrel - eek!).