I chose to make my Mum's lace scarf out of the Debbie Bliss silk. I knew I would need two skeins as I wanted to make it wider than the pattern suggested. I bought two skeins because I knew I needed two. As I was knitting it I started to hope that maybe the one skein would stretch. I knew it wouldn't but I started to pretend it would. Right up till about 1 metre worth of yarn to go I've been pretending that this will be a nice short scarf and I would have one skein left over. Well finally reality has bitten and I have admitted that there is short and then there is won't go round her neck. I'm sure that feature is integral to the classification of an item as a scarf. "Hey Mum here is a long bit of knitting" doesn't have quite the same ring as "here is this beautiful silk scarf I have lovingly made you". I can just see her trying to make the not-scarf go round her neck and me saying "oh I thought it would be long enough, I did have more yarn but I wanted to keep it and pet it". No daughter of the year award in the offing for me! 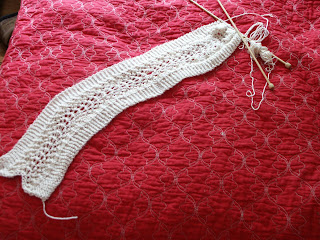 So here is the Easy Lace Scarf about 50% from completion rather than finished as I was pretending it would be by today. Still when you look at it all stretched out like that, maybe with some good blocking... Bad daughter - share your yarn nicely!
away

Marianne said…
Now Sarah, have you never heard of 'neck warmers'? you just seam or graft those two ends together, just make sure it can fit over the head...(my really bad..enabling bad daughter thing...)
On the other hand.....there is such a wonderful thing as good karma...you give really good knits, you receive really good yarn....anyway, that's what I'm hoping for....(ok, I'm not holding my breath on that one)..but it feels truly great to gift a loved one with something so special, you know that, you know you know that.

Janey said…
Your post really made me giggle!! That is exactly how I felt about the posh yarns Jaywalkers, and then my sis didn't even appreciate them!! Hopefully your mum will adore her scarf...it looks lovely so far!
4 June 2007 at 20:40:00 BST

florencemary said…
Sarah, get that second skein knitted up, you meanie. Just be stingey to the people who you don't care about as much. I'm posting this, feeling guilty, because I'm a meanie too!
5 June 2007 at 21:32:00 BST

Artis-Anne said…
LOL Sarah your post made me laugh and I think we can all relate to that feeling when we are knitting something really lovely and we covet it for ourself. I am certain your Mum will love it and she is a very lucky Mum too :)
7 June 2007 at 10:46:00 BST

Sarah Ditum said…
I can tell you from experience how embarrassing it is when someone puts a scarf you've made on and says, "Oh! I love these short scarves!" while desperately poking the ends into their coat. Lesson learnt: it's always a good idea to break into that second skein. It'll be worth giving up the petting yarn for your mum's reaction!
19 June 2007 at 10:14:00 BST