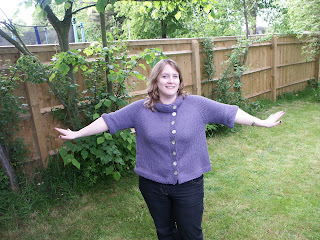 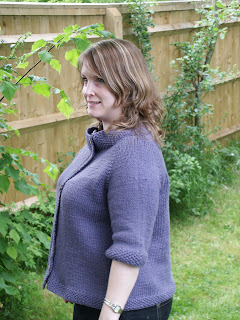 Pattern: Flair by Wendy Bernard
Yarn: Blue Skys Alpaca Cotton in Thistle. I used about 5 and 3/4 skeins for size L with a few extra rows on the body and the collar. It is the lovely softest cotton but the downside of that is that it is pilling and shedding a fair bit.
Needles: 4.5mm/80cm circular and 4.5mm bamboo dpns for the sleeves
Started: 11 April 2007
Finished: 20 May 2007
New Skills: First go at top down all in one construction - great for sizing as you go, and saving on the seaming but I did get a bit bored and demoralised on the long rows towards the end. First make one increases which after a couple of slips I got on with quite well. First seed/moss stitch edging. First buttons. 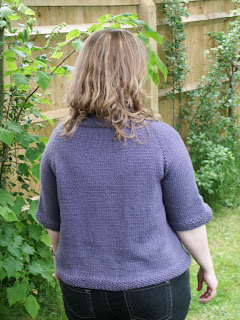 Modifications: More length and a higher collar - and so more buttons.
Notes: It felt like this was taking a long time so I was surprised to see I only started it on 11 April. I think it felt slow as you could see where it was going from the first try on and then I was just impatient to have it finished. It is a bit homemade rather than handmade - some of the picked up stitches round the sleeves were dreadful - however I just stitched them tight with some sewing thread and they are fine. My attempts at button placement have been awful but I have never done that before so I mustn't expect it to be perfect. I haven't done the inside ones yet as I didn't buy enough and I actually think I will just sew it closed to get it to lie nice and flat - because of the shape I would never wear it open anyway. I think I added too many buttons and I feel they are a bit close together. I love how the increase for the sleeves work to create the nice lines though I'm most dubious about the sleeves. I thought they may be too tight but actually they are roomy enough it's just at the end - the seed stitch is just curling in a bit too much for my liking - however I haven't blocked it just steamed them with the iron so I hope I can get them a bit flatter. 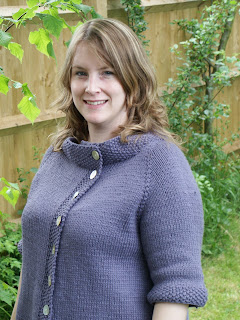 So do I like it? On the whole yes - it isn't as unflattering a shape as I feared it might be - sadly it hasn't made me look like Wendy but I don't think I should dislike it too much for that ;o) At the moment my head is full of the mistakes but I'm going away on a residential course tomorrow for a week. I think some time away from each other will do us both good and I hope we'll have a fond reunion.
made by me yarnery

Sarah Ditum said…
Snap - I was just blogging my own long-lingering project! You've done a brilliant job on Flair. The colour is fab and I don't think it unflattering at all. I can see that looking very chic indeed with a pencil skirt, if you happen to have one around.
20 May 2007 at 20:21:00 BST

Marianne said…
Sarah, I've got to say, from here, it's a beautiful sweater, the colour is such a stunner on you, seriously...you did a fabulous job and again, it's beautiful on you.
We're always our most picky critic, eh?
That's a sweater to be proud of.
20 May 2007 at 21:00:00 BST

dreamcatcher said…
That is soooo lovely and looks great on! Fab colour, and I love how you added a bigger collar and extra length.
20 May 2007 at 22:14:00 BST

Reckless Glue said…
I'm so excited that you've finished!!!! It looks great! All of your issues with it seem to parallel mine...I felt the same way about too many buttons, curling sleeves etc. you should be very proud, and that colour on you is smashing! great job :)
20 May 2007 at 23:31:00 BST

Kath said…
Wow - you've done a really lovely job there! It looks lovely and such a lovely colour - pity about the pilling but that's the drawback of lovely soft yarns! Well done you!
21 May 2007 at 17:21:00 BST

Artis-Anne said…
Absolutley fabulous on you and I so love that colour , must check that yarn out . I do think we are most critical of our own work too; but you have done a fantastic job on this one.
Great yarn haul in your post below I am on a self imposed ban from going on E-bay for a while as its way too tempting
23 May 2007 at 07:13:00 BST

Modelwidow said…
That is just so nice, and as it is a first for some things, you deserve and extra big round of applause. And I agree with the others, we are our own worst critic - it looks great to me.
24 May 2007 at 12:03:00 BST