- February 11, 2007
Lots of lovely weekend knitting means I'm getting around the top bend and into the finishing straight on el tanko. The lure of Flair next is pulling me on. 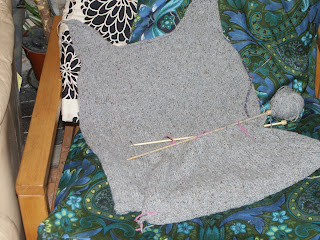 Also my Quick Knit Sock is bearing a pleasingly, striking resemblance to the original. Was that a touch of pride I sense there? Better go carefully! 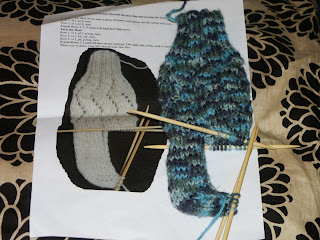 Finally, I have resolved my sock book dilemma. I tried to request the contenders from the library as Charity wisely suggested - not one single copy of any of them in all of Oxfordshire! Now the selection of knitting books in my local branch is poor (though I'm getting them out in rotation to try and encourage them to stock more!) and I didn't really expect it to be anything else but I assumed they would have a little more selection countywide, but no, far too specialist apparently. My careful, considered research was halted as it had barely begun, thankfully webby wonderland didn't let me down. For the moment Charlene shall be my guide to greener sock pastures. Found a socky blog and the Angel Knits forum which when combined with the comments I received (thank you) tipped the balance in the favour of SKS. Fingers crossed should be here this week, along with four Rowan magazines I hope - took advantage of the great offer that Dreamcatcher mentioned. Off to make the most of the remaining hours of weekend knitting, hope they were productive for you too.
yarnery

The Rowan magazines took a little under 2 weeks to arrive, mighty slow compared with everywhere else I've ordered - but they sent them with DHL, I guess as they were quite heavy :-)
12 February 2007 at 00:59:00 GMT

acrylik said…
Your WIPs are looking fantastic, you've certainly been busy over the weekend.

Sarah said…
Thanks everyone for your comments.

Kelly said…
Wow, the tank top is really coming along! It looks great.

I had a chance to browse Sensational Knitted Socks when I was at Glenna's, and it really is great. Lots of pattern variations, and good explanations of all of the differet sock constructions. It's at the top of my list for knitting books I must own.
14 February 2007 at 15:02:00 GMT