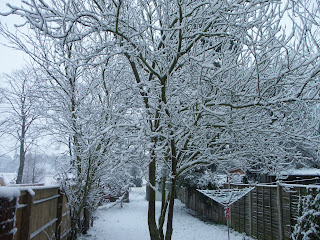 Tragically I live far too close to work to wangle a snow day, though they did let us all go home early :o)

Yesterday like a intro for today some yarn arrived called Snowball, having seen plenty today I can confirm it is nothing like a snowball in colour. 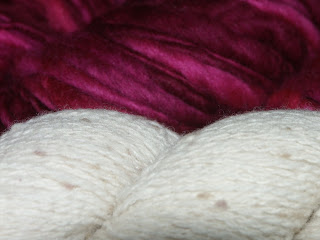 I got 4 skeins of the Rowanspun DK in Snowball - thought I'd better nab it while it was on ebay so I could do another shapely tank - there's confident that I'll like the Thorn one for you! Sadly one of the skeins is a different dyelot and it really is quite a different colour - so fingers crossed that the shapely tank only takes three - I think it may do actually as there so much yarn per skein. If not I'm sure I'll find something else to knit with it. I really like this yarn, sad that it got discontinued.
Also in the photo is a skein of Colinette point five in Cherry - isn't it just such a warming colour? I could cosy right into it! Another ebay bargain - sadly just the one skein but I wanted it so much I shan't mind if I don't put it too a good use - happy to have it as a pet.
Had another moment of MUST HAVE today - these do overcome me approximately every 15 minutes and I try and resist some of them occasionally but I was very happy to give in today. Wendy from Knit and Tonic has her swingy jacket pattern up - called Flair and I love it. As soon as I saw the word beginner I knew it was coming my way, right now. Just trying to find a slightly more budget yarn than the Blue Sky Cotton - am thinking Patons Cotton DK in Azalea at the moment. 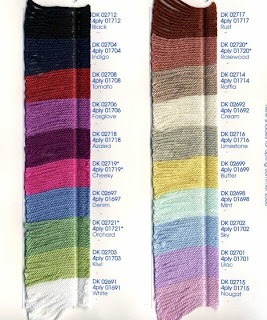 And to finish off here's my Susan sock in progress - the pattern isn't too clear in this yarn/photo - but I'm pleased with how it's coming out - only two rather than my normal three attempts. Must be improving! 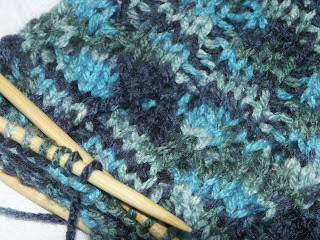 Sarah said…
That new yarn looks gorgeous. I love the Rowanspun too. I'll be devasted when it finally runs out!

Alice said…
Me too, me too! I have to do that swing thing. Been waiting to pounce on it but I'm too skint to get the yarn. It's a must-have though.

Artis-Anne said…
Re your Rowanspun different dye lot could you not knit alternate rows then it wouldn't show up ? Love the Cherry colour against it , now if it was Xmas piccies of snow, snowball,have I missed it:)
I constantly have the MUST HAVES but isn't that normal ;-)
Great sock , love the colour , will check out that site
9 February 2007 at 17:49:00 GMT

dreamcatcher said…
I love Flair too and rushed out and bought it the day it was published :-D Love the yarns you've got, another fan of Rowanspun here. I have no clue why they always discontinue such nice yarns.
10 February 2007 at 18:47:00 GMT

acrylik said…
Lovely yarns you have there, especially the Point 5 - I just love that yarn! The shade you bought is beautiful.

Sarah said…
Hope that I can live up to the original Flair. Am really looking forward to seeing others in Blogland as it's so nice to see the different versions/interpretations of a pattern.

Piglottie said…
I have the Rowanspun in Snowball to knit Eris with. I think I may have some extra skeins (I always play so much on the safe side!) so if you email me piglottie AT yahoo DOT co DOT uk and let me have the dyelot numbers, by some miracle I might be able to help. Its happened before, honest (someone needed an extra ball of DB Baby Cash and I happened to have a spare ball of the same dyelot in my stash - the knitting fairies were good that day).
14 February 2007 at 12:34:00 GMT