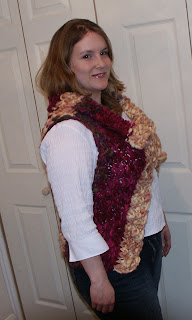 The point5ish waistcoat is completed and I officially love it. I polished off the last couple of rows tonight to squeak it into my February FO list. Much as I love neat, tiny stitches going crazy with the 15mm needles was very satisfying. 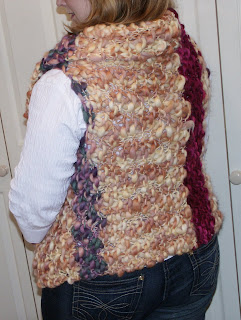 Pattern: A rectangle with giant buttonholes for arm openings
Yarn: Colinette Point5 in Cherry (1), unnamed yarn from The Kaleidoscope caramel (2), and two ends of balls (1/2), super soft, warm and beautiful
Needles: 15mm plastic straights
Started: 25 February 2007
Finished: 28 February 2007
New Skills?: Buttonholes
Notes: Very rewarding to see this grow much as it had done in my imagination. After petting the Cherry for a while and enjoying the Three Start Scarf I thought about how that draped and whether it would be possible to make a wrap, then it turned into a wrap with space for the arms. I love how it has turned out, it feels very grand on and the colours are sublime. Just have to sort out a better closing than some bits of yarn - I'm thinking ribbon at the moment.
--------------------------------
In other knitting news the yarn for Flair is on order. Yay! kpixie have the Thistle and ship to the UK, for what, with their lovely 10% off your first order offer, worked out to be a great price and should be quicker than waiting for UK stock.
--------------------------------
The Rowan magazines arrived, swoon. I have only had a chance to look at one in depth and am holding back the others for times when I can savour them properly. I hadn't realised how book-like the Rowan magazines are and am even more impressed by the special offer. So far in the one magazine (34) I have fallen head over heels for the complicated looking Rapunzel and may perhaps have ordered some of that lovely Rowanspun Aran in Gables that Kendra and Dreamcatcher made impossible to ignore for Moonlight.
--------------------------------
Here's to a great knitting March ;0)
yarnery

dreamcatcher said…
Great waistcoat, must be good to have such a quick knit too! Glad you're liking the Rowan magazines, it's such a good offer. I see my work here is done as you've snagged some of the "Gables" :-)
1 March 2007 at 00:32:00 GMT

Artis-Anne said…
Lovely :) so satisfying when you get something finished
I doo love the new Rowan mag , so many things I would love to make
1 March 2007 at 10:23:00 GMT

acrylik said…
Wow, that's amazing - just love it! Point 5 is so gorgeous, and the speed at which it knits up is always good.

Now I have a Rowan magazine addiction. Sigh. Anybody who hasn't got the latest Rowan mag is not allowed to bid against me for it on ebay or there'll be trouble!

Cara - I had missed the Parka whilst drooling over the patterns but indeed it is a work of beauty.

Dipsy Doodle said…
Wow, this is truly stunning! It looks so funky and unique, what a great job you did with that waistcoat! Such quick knits are very satisfying, aren't they? Great work!
2 March 2007 at 09:30:00 GMT