What was I thinking?

Sometimes these days I like to nudge myself up a class in the world of knitting, not so much a beginner beginner, I'd maybe see myself as an advanced beginner, I can knit, purl, increase, decrease, goodness I've even knit socks. However it would seem that I am unable to recognise when I am knitting the biggest catastrophe of a project EVER.

Actually it may not be the biggest catastrophe but it sure is the longest. 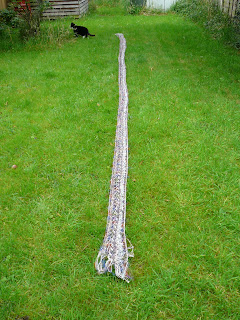 There was thought behind this - I'm not sure if that makes it better or worse? I wasn't hypnotised and made to knit this, my cats weren't held ransom to make me knit every one of the 500 odd cast on stitches over and over again. I chose to knit it, I watched it grow, I am responsible for this monster. Just call me Frankenstein.

The original concept was good, I stand by that. The pattern is Stashbuster Serape (Simply Knitting Issue 24), I was drawn to the idea of using up some of my slightly dodgy early days purchases and some dubious yarn gifts from well meaning rellys so I was pleased with this pattern for a large serape which allowed you to use lots of different gauge yarns. I thought my friend who dresses a little hippier than me would really like this.

I have to say I detested it while I was knitting it, but if you put many of your least favourite yarns together in a mindless pattern with seventy billion odd stitches in a row you're not going to enjoy it are you?

So I didn't let that stop me, ah the warning signs... on I slogged. I thought, you live and learn, I don't think I'll make the other one of these I had in mind for my auntie for Christmas. It's not such a brilliant, quick knit stash busting idea after all. Then I thought I'm not sure this needs to be really wide, does it? Maybe just 5 more rows. Soon into the next row I thought actually it'll make a really nice lacy scarf I'll cast off next row. Yippee! So there I was casting off thinking well it's a bit odd but it's kind of pretty, I'll write a little blog post about how glad I am its finished, wrap it up, hand it over, no problemo. 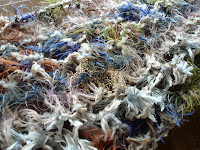 Then I stood up and 20 odd foot of monster slithered to the floor. Somehow I hadn't equated the mass of stinky knitting on my circular needle to the longest, stinky scarf EVER.

So is there a way back for this creature? A large part of me just wants to throw it in the bin and forget all about it. I can't face just ripping it out - I don't want the yarns back! My current thinking is that I'll cut it in half and unravel the ends, tie them up and there you are, two long, slightly naff scarfs. Better than one monster? Let's see who wins in the this battle of the creator and the creature...
away

Piglottie said…
Oh hun, I'm so sorry but I am laughing my pants off here - but in empathy really. There is something about knitters that despite overwhelming evidence to the contrary, we carry on knitting in some vain wish not to have our efforts wasted yet we put more effort into creating something that is, well, not what we wanted. I would suggest felting but then you would probably end up with a very skinny but long scarf lol. One day, in the midst of your latest Fair Isle creation, you will look back on this day with wistful glee :)
2 August 2007 at 20:19:00 BST

Sarah Ditum said…
Good grief. I can't imagine the persistence and devotion you must have in you to have made that thing. Honestly, if it was just an exercise in using up yarn you don't really like, I think it's served its purpose. Bundle it off to the charity shop. Let some other thrifty person unravel it if they must - you've paid your dues to that yarn, and can let it go with a clear conscience ;-) I'm so glad you showed before you throwed, though!
2 August 2007 at 22:55:00 BST

Linda said…
Charity shop! Someone will love it I am sure and then you won't feel bad about it wasting away in a corner. :) The amount of things I have made that I knit and all the time think "what am I doing?"
3 August 2007 at 15:02:00 BST

Janey said…
Wow! What a scarf and a half!

So much hard work but I do tend to agree with Webbo and QotF...charity shop it is! Someone will love it so much! Who knows, give it to a local shop and you might just see someone wandering around in it this winter, wouldn't that bring a smile to your face?!
3 August 2007 at 18:49:00 BST

Seahorse said…
I agree, someone with a quirky fashion sense will surely snap it up from Oxfam or similar!

I'm genuinely sorry it didn't work as you'd hoped but you certainly tell the story in an amusing way! If it helps at all, I too have often knit doggedly on chanting 'this colour does suit me/this sweater will only be a tiny bit snug/the asymetric look is very in just now'... lol
3 August 2007 at 20:10:00 BST

sheep#100 said…
How about cutting it into smaller segments then sewing them together and felting the mess to make it a table topper?
4 August 2007 at 14:43:00 BST