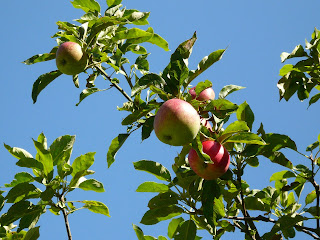 There is just nothing to beat a finished object; never mind the thousands of stitches that I have put towards Arisaig's arm this weekend, two much more simple FOs give me a much greater sense of achievement.

Pattern: Fulled Lopi Tote from Hello Yarn
Yarn: SWTC Karaoke - 1 ball of Wild Cherry; 1/2 ball of Mermaid Mix
Needles: 4x 4mm Metal DPNs
Started: 4 August 2007
Finished: 26 August 2007
Modifications: Swapped Karaoke for Lopi but kept the number of stitches cast on the same, this made for a narrower bag so I made it shorter than the pattern called for to keep it in proportion.
New Skills: Three needle bind off (who knew that would be so easy, the name sounds so complicated!) Fulling
Notes: The fulling/felting was a struggle. I have to say the pattern was great and I like the FO a lot but it was harder work with the Karaoke than I thought it would be. To brand this yarn specifically as ideal for felting suggests that the merest swish through the washing machine will do the job. After a wash at 40 degrees and another at 60 I'd run out of denims to wash and the bag was as perfect as when it went in! Now I've shrunk woollens in the past at 40 with no problem (accidentally of course) so this didn't seem quite right to me. I then put it in very hot water and gave it a good scrubbing by hand - this had some affect so I then boiled the kettle! Finally success - not the best job for a hot August evening as much vigorous rubbing of a scorching hot bag makes for a warm Sarah! There is more stitch definition left than I would have hoped for at the start but I was just grateful to create a firm fabric by the end. Sadly I deleted the before shot from the camera but there was a fair bit of shrinkage - I think the FO is about two thirds the size of the original knit. 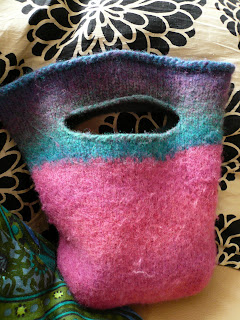 Overall I think this is a cute bag that I am proud to give to my friend but I won't be rushing to make more from Karaoke. It's a shame that it doesn't felt better as I'm not a great fan of it unfelted either. It is distinctly squeaky and easy to break - good job it was a sale bargain and the colours are so gorgeous.
-----

Basking in the warm glow of cranking out one gift FO I therefore decided that a chunky knit I could polish off nice and quickly should be the next gift project on the needles - my cousin mentioned that she'd quite like some legwarmers when she saw me sock knitting a few weeks ago. This pair from the fab Stitch 'n Bitch Nation adapted for Rowan Plaid proved to be the fastest FO ever :o) 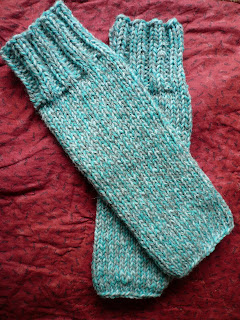 Pattern: Roller Girl Legwarmers - Stitch 'n Bitch Nation
Yarn: Rowan Plaid, Moonwave - about 1 and 1/2 balls
Needles: 5 x 6mm Bamboo DPNs
Started: 26August 2007
Finished: 27 August 2007
Modifications: Swapped in a very chunky yarn so dropped the stitches from 60 to 32 for the small size based on the gauge I got.
Notes: Love them! They were a fun FAST knit and look just as I hoped they would. Super cute and cosy. I've already got another pair planned for my friend as well; let's just hope the recipients like them as much as me.

In other knitting news Piglottie is having a fabulous charity auction for a whole range of goodies such as Hipknits Aran weight silk yarn, Knitpicks option needles and much other loveliness. Details here.

-----
The Hederas are progressing and it looks like it will be the Esther socks next. I expect the Hederas will be finished by mid week if all knitting goes to plan so any Snicket fans still have a last chance for a vote! Thank you so much to everyone who voted and commented. It's been such fun - I've been checking the poll results every five minutes or so!

-----
Finally a big thank you to Kath and Blog Blethers for nominating me for the Schmoozer award.

This is already a long post so I'll try and contain my speech and not do a Gwyneth and weep everywhere ;0) I'm very touched and pleased that other people enjoy my blog and the frequently inane comments I leave on theirs :o) This knit blogging community has brought so much to my life and the friendliness and generosity of other bloggers is just too wonderful for words. Hurrah for us!

away made by me

Marianne said…
Sarah, I DO love your blog!
Love that felted bag also! and yes, gorgeous colours... I've not used the Karaoke...but I always just toss whatever it is in a mesh bag with a towel or two and set for the hot cycle...and check on item every 5 minutes...
The legwarmers are fabulous.
27 August 2007 at 19:32:00 BST

Sarah Ditum said…
Great knits! The colours of the bag really sing, and the legwarmers are lovely. I like Rowan Plaid a lot: I made my BF a scarf from it, and it's so soft and surprisingly hard-wearing.

I've not tried felting yet but I sure don't like the idea of standing over a sink full of steamy water on a hot summer day. You can consider yourself a good friend to have gone through that for a gift!
27 August 2007 at 23:28:00 BST

dreamcatcher said…
Love the FOs - the bag looks great after all your hard work :-) Interesting to hear that Karaoke can be difficult to persuade to felt though. Definitely worth it for the colours alone. The legwarmers are great in the Plaid, nice idea for using up an odd skein or so too!
27 August 2007 at 23:41:00 BST

Artis-Anne said…
Wow Sarah youare so busy. LOL I had to laugh at the felting; its so true how many of us accidnetally felt something but doing it on purpose is another thing !!!, Great bag though
Lovely leg warmers too
You defo deserve the award and I just love seeing it go around all you lovely bloggers :)
28 August 2007 at 07:23:00 BST

Piglottie said…
The bag looks great. I have a book on felting, and she says one of the most important things is aggitation. I usually wash on 60 as well, but I think yours looks great!

Thanks for the mention of my charity auctions - its very much appreciated. And congratulations on the award, thoroughly deserved.
28 August 2007 at 12:31:00 BST

florencemary said…
I think your FOs look great and I love the colours of the bag! I haven't really done any 'on purpose' felting before, and although I WANT to, I think I'll sit with head in hands by the washing machine the first time I do it!

blog-blethers said…
I love your bag and giggled when you mentioned accidental 'felting' - haven't we all done that one on a cherished knit! I've felted one bag, knitted with 3 skeins of Noro Iro, and had similar problems too. THREE boil cycles later, mission accomplished!! However, I wasn't that happy with the finished item - turned out to be a pretty expensive mistake:( Have another bag already to go - so it'll be "chock's away" and into the machine when I feel brave enough...
30 August 2007 at 00:10:00 BST

Reckless Glue said…
your tote looks great--so cute I absolutely love the colours! I had the opposite problem with felting mine...it felted up instantly and there was wool everywhere--sounds like yours gave you quite the workout!