Lush and lacy and... 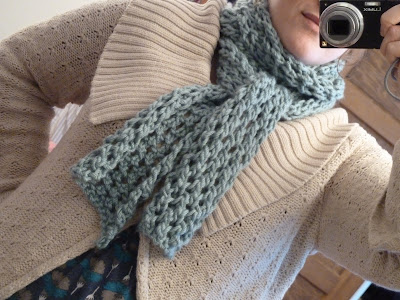 Simple and quick to knit. If I'd had the inspiration earlier in the year then I would have had this scarf done for Christmas. As it was I saw this yarn on sale at the end of November when the list really shouldn't have had any more gifts added. Luckily my friend is easily persuaded that good things come to those who wait and at least it's done while the weather still warrants it!
When I opened one of my new books -  I was amused to see a very similar piece - Big Lace Scarf in an almost spookily similar shade!

The books is More Last Minute Knitted Gifts (every bit as scrumptious as the first book - if you like that I'm sure this would be a good book for you) so it is only fitting I'd find a twin for it there!  Squeezing the yarn I wasn't sure what pattern I'd find for it but I knew I couldn't leave it. When it came to it I just didn't have time to search for a pattern that fit my idea so as what I wanted seemed simple enough I just a knit a row and then did a row of yo/k2tog. It gives the length and the feeling of contrast between the weight of yarn and the pattern I wanted and I'm happy with how it looks but I had assumed that the lace wouldn't roll in as the fact that I was doing k2tog would give a kind of garter base if you know what I mean? Actually it works as an open stocking stitch - above is the right side - below is the wrong side.

Pretty enough and very wearable but if I were to make it again (and it could become my go to gift knit) I want to try the pattern from the book now I have it.
To finish - a little peak at the other thing that is FINISHED! 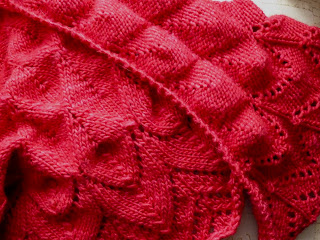 Not an official ta da yet as it needs washing and blocking but the knitting of the Christmas gifts is officially over!
made by me

Rose Red said…
Go you! A designer!! The blue scarf is lovely - that DB superchunky is a lovely yarn - and I think the lacy scarf is a great use for it.

Bells said…
oh isn't that stunning! So simple and effective - and your own design! But yes, alarmingly similar to that one in the big. Just goes to show what a great idea it was!
19 January 2011 at 09:36:00 GMT

Modelwidow said…
Very nice scarf. Intrigued to see the next 'TaDa', looks very interesting not to mention a gorgeous colour.
22 January 2011 at 16:00:00 GMT