- November 16, 2008
There were signs of a slump into the knitting doldrums mid week. Two inner knitters were battling and the likeliest outcome seemed to be a ceasefire in the form of no knitting. 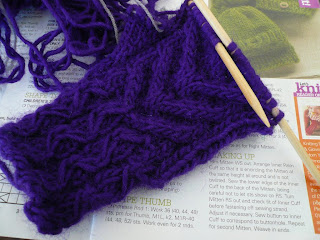 I was knitting away happily on my flip top mitten when it became apparent that there was going to be an issue, a not enough yarn type issue. Attempting a pattern that requires a skein of Lamb's Pride Worsted when you have only half a skein looks, with hindsight, foolish. That's of course because it is foolish but the Frugal Knitter had been having her say.

She wanted that half skein to be enough for the child size because it would use up some stray yarn ; the Frugal Knitter pointed out that the pattern said it took a skein for the child size and a skein for the adult size so surely half a skein would be fine for the child size. Well no. There is not enough yarn to make two of the mittens, to be honest it's going to be tight for one. So the Stash Loving Knitter said "Sucks to you Frugal Knitter, now you'll have to buy another skein and then you'll still have half left over." Then Frugal Knitter says "Rip out the mitten and make something even smaller with the half skein then you won't have to buy anymore."

On and on they were arguing and the mitten lay abandoned. A few desultory rows were knit on this sock or that but there was no zing in the fingers of the Outer Knitter, not whilst such conflict raged over the little mitten. Thankfully the peace loving Mr (who is becoming oh so wise in the ways of living with a knitter and maintaining a quiet life) suggested that the best cure for the knitting doldrums was to start something new. 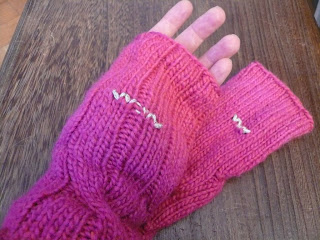 Perfect. The Startitis Knitter was super happy and squashed down Miss Frugal and Miss Stash Loving. The Christmas knitting schedule simply can't allow any knitting doldrums to be entered , it's got to be all zingy knitting here till the end of the year. So it's been full speed ahead on some new mitts, the lovely Dashing, which I have plenty of pretty Karaoke yarn for. 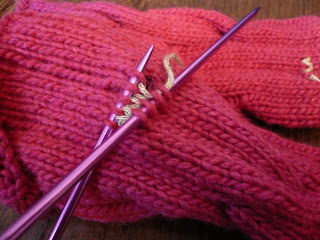 This is a wonderful pattern: simple but with a little interest in the form of some cables and the thumb placement. It's also a great feeling to be knitting heavier weight yarn in the round. My brain thinks that I'm working on socks and then I'm pleasantly surprised at how fast it knits up. 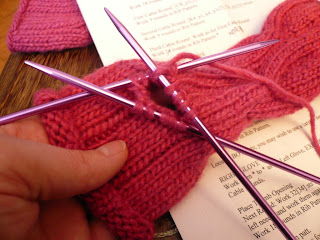 My favourite part of the pattern is the way the thumb is worked; this is a lovely bit of engineering on a par with the glory of a heel turn in my knitgeekery books. I'm guessing that it's the same principle as an afterthought heel? You knit some holding yarn into the place the thumb should be and then finish the tube of the mitt. At the end you go back and take out the holding yarn and pick up the live stitches, add a few more each side and then knit on the thumb. 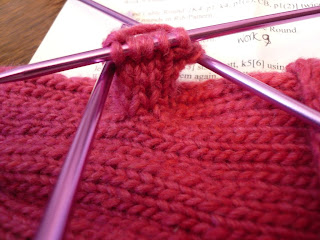 Simple really and yet rather special. Another little piece of knitting magic; enough to soothe any inner conflicts. 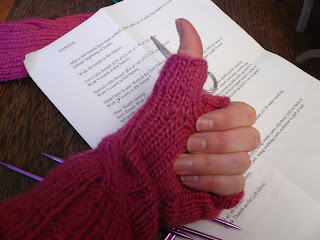 Charity said…
Oh, Sarah, you're too funny, you sound like your own personal set of the Little Miss books!

Leonie said…
Good on you for getting those inner knitters to pipe down so you could get on to more important matters i.e. more knitting!! Hopefully when you get back to them they are more in agreement with each other!
16 November 2008 at 21:20:00 GMT

Rachel said…
All I have to say is way to go Mr! He certainly does know the inner workings of a knitter! Like your Dashing...fingerless mitts are such a quick, satisfying project (well...when you start with enough yarn!) :).
17 November 2008 at 00:23:00 GMT

Bells said…
Wow, those knitters live at my house, too! I think yours and mine would get on famously.

Knitted Gems said…
Your husband is much braver than mine. Mine would never even think to make a knitting suggestion.
Love the fetchings!
18 November 2008 at 21:18:00 GMT

Terrie D. (StarSpry) said…
How funny! I'm glad Mr was able to step in and help :)