- November 29, 2008
I've quite some knitting pride in this little crop of Dashings that I have tended over the last few weeks. 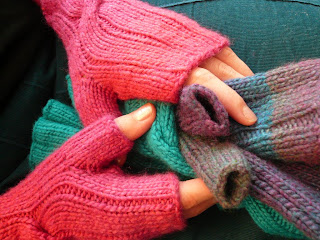 The whole idea of whether/who/what to knit for Christmas gifts has required some extra thought this year. Last year I set out with unmanageable expectations and ended up giving the last of the gifts meant for Christmas as a birthday present this September. My productivity and inspiration dried up in the approach to Christmas and I didn't finish anything last November or December. Knitting the Christmas gifts throughout the year and stockpiling them is by far the most sensible approach but still, I can't get really excited about gift knitting until the magic of Christmas is within reach. I love to make my gifts in one form or another, though I try and make sure the recipient is going to feel equally fond of the idea of a handmade present. Last year I think I focussed too much on the pattern I thought people would most want to receive; this year I've decided that the knitted items have to be things I wantto make first and foremost so that there is maximum enjoyment in the stitches and a better chance that the knitting mojo won't be chased away. 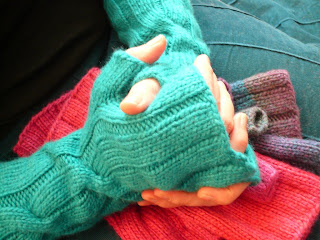 So I looked at the list of giftees and tried to think of patterns I fancied that were a nice fit with them. Dashings have long been on my to do list so it was certain someone at least would have warm hands this year. 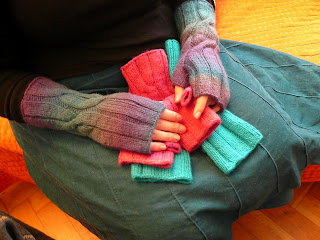 I had a group of three girlfriends to make for, an early 'Christmas' tonight as the deadline and a wish to make them all something similar so whenever they wore their gifts there would be a connection amongst us all. The three colourways of Karaoke I had in the right quantities for this great little pattern were the inspiration in the end and looking at this posy of gloves I am delighted with what I have made. 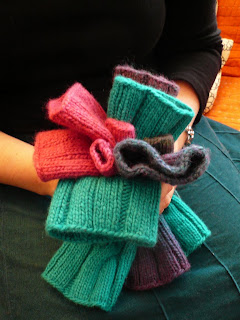 Pattern: Dashing
Mods: Shortened the cuff by reducing rows after the last cable and before thumb placement
Yarn: Karaoke in Mermaid, Mermaid Mix and Wild Cherry - between one and one and half skeins per pair
Needles: 3.75mm Metal DPNS
First Pair Started: 13 November 2008
Last Pair Finished: 27 November 2008
away made by me

raining sheep said…
Those are fine indeed and very wise to knit throughout the year and stash away gifts - I do that by knitting stripey socks all year and then I can give them away.
30 November 2008 at 05:19:00 GMT

Rachel said…
Your mits are lovely--and such a great idea to have matching gifts for your group of friends. I agree that spacing gift knitting out over the year is wise, but like you, I don't seem to get into the Christmas knitting spirit until time starts running out! Good luck finishing up the remainder of your list!
1 December 2008 at 04:15:00 GMT

Donna said…
I saw this post yesterday and went straight home to start a pair in Mirasol Miski. I have one done bar the thumb already. Yours look very different with the mods but I do like them, all the colours are great.
2 December 2008 at 14:29:00 GMT

Anonymous said…
I so agree with you about your approach to gift knitting. I got burned out last year too, and this year I have also only made things I want to make, and that are small. Love the Dashings - they're a great gift idea!
4 December 2008 at 12:50:00 GMT

Littlelou said…
Well done you..im still trying to get something done for my brothers fiancee. The wool looks yummy..so smooshy and warm.
4 December 2008 at 18:03:00 GMT

Modelwidow said…
Lovely set of Dashings there, and the connection between you is such a nice idea
7 December 2008 at 19:32:00 GMT

Anonymous said…
They're fabolous. My christmas knitting is non-existent although I've hatched an idea this last weekend which I may just manage to get done on time.
8 December 2008 at 10:02:00 GMT