- April 20, 2008
I got there in the end and my PIF parcels are now safely with the recipients so I can share details here. (Well actually I'm only two thirds of the way there but the other third is in hand - if not actually knit yet, but hey, let me revel in the glory of nearly being there! Number three is a surprise as I only got two sign ups so I think I get way more leeway on that one.) 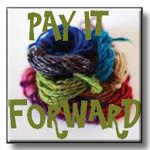 I so loved the Pay it Forward idea and thought for sure I could make the six month deadline, I knew Christmas wouldn't help matters but I'm glad to see that later versions gave a one year deadline - I made that :o) and some new friends into the bargain. A lovely project.
My first sign up was the lovely Von for whom I made some purty socks as the little needles trouble her hands and I would like everyone in the world to have some hand knit socks. I loved the FO and I'm glad to say that she did too so I think we can call them a success. 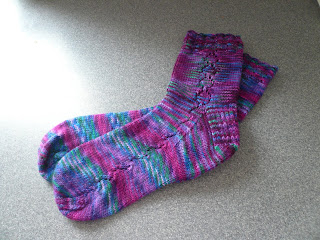 Pattern: Fools Rush Socks
Yarn: Colinette Jitterbug - Florentina - 1 skein
Needles: 2.5mm Brittany Birch DPNs
Started: January 2008
Finished: April 2008
Notes: I liked this pretty lacy pattern for a variegated yarn as it adds interest and doesn't get lost in the colours. The cuff is is my favourite part and I loved the way it seemed to bloom like a flower from the needles as I knit it. A really enjoyable knit so no swearing went into the stitches on your toesies Von! 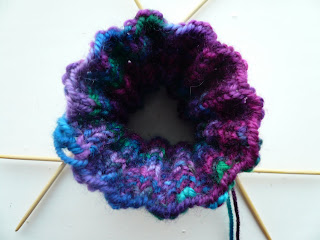 Second sign up was Little Lou - for whom I made a snuggly hat just in time for spring! Ah well at least wool doesn't go off. 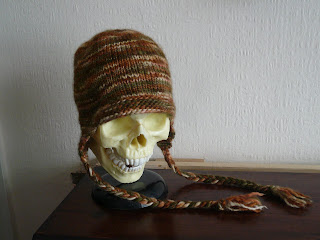 Pattern: Thorpe Hat
Yarn: Manos del Uruguay - 6709 - 1 skein
Needles: 4mm long metal DPNs
Started: March 2008
Finished: April 2008
Notes: I've seen lots of cute versions of these on the blogs and will be making more for sure. I didn't crochet the edging after trying and being baffled! I like the slip stitched finish and I thought it was more important to get the parcel on its way before summer arrived, though by all accounts this will be getting use in June in Scotland. Good colours for this PS group though - maybe that was what slowed me down.
made by me yarnery

von said…
Yep, my socks are fab! As is the hat you made for Little Lou :oD

I really do think that everyone should have some handmade socks! I hope you realise that I'm now fighting the urge to have another go at knitting socks...my hands will hate me...
20 April 2008 at 15:49:00 BST

florencemary said…
Gosh, what lovely PIF knits! I mean, one of the recipients even wanted to wear their knit to the grave.

raining sheep said…
You are becoming a prolific blogger - I can hardly keep up with your projects - obviously that book was a good thing and I should get a copy...the socks are really cute and will be very happily received, I'm sure.
21 April 2008 at 13:50:00 BST