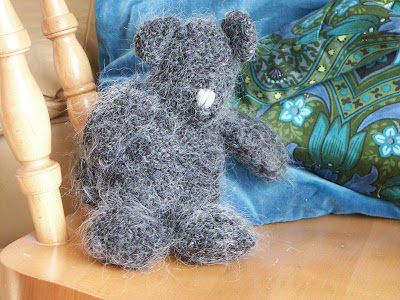 Isn't he an adorable and entirely unique chap? Yes his arms look like wings, yes he has eaten too much stuffing and yes his eyes are a little curious but he's a bear of character and I think character goes a long way in this world! 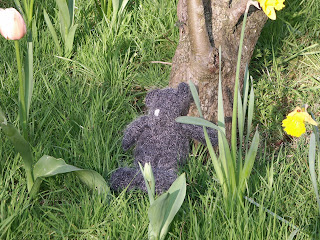 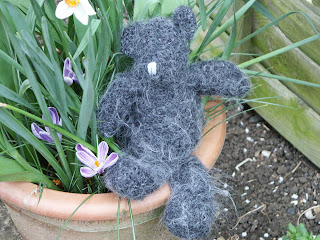 Pattern: Horace by Amanda Hone. Please visit: Bears United to see some friends of Horace who may stand a greater chance in a bear beauty contest!
Yarn: Sunbeam Sumatra - a bargain from ebay and suitably soft and fuzzy for a bear
Needles:5mm plastic straights
Started: November 2006
Finished: 24 March 2007
New Skills?: This pattern was my first experience of increasing and decreasing which was one of the reasons I wanted to try it.
Notes: The pattern is great, easy to follow and I think if you bought the right stuffing (I had acrylic rather than cotton which I think is too springy and stretchy and I am blaming it for the wings issue!) and some proper eyes you would easily to be able to recreate a bear of dashing good looks as well as tremendous character. Having created Horace as he is I feel it is too cruel to take off his eyes etc but I expect I will make this pattern again and will note the above notes when it comes to making up!
made by me

Artis-Anne said…
I love Horace , he is adorable and all the more special and as you say a character is all one needs.
I checked out Amanda's blog and guess what she only lives about 3 miles away from me !!
8 April 2007 at 18:50:00 BST

Marianne said…
I think Horace does have loads of character, I know that's what I always look for in a bear, he's quite dashing in his own personal way...yep, I love him.
Your flowers are lovely, and I've always wanted the white bleeding heart, they're beautiful, lucky you!
9 April 2007 at 19:20:00 BST

Modelwidow said…
Horace is lovely - bears should have character. I hope you are feeling suitably proud of him.
10 April 2007 at 13:28:00 BST