PS I forgot one!

- December 29, 2011
It seems that I did so well making a secret gift for my beloved that I have now wiped it from my mind! Luckily I remembered to give it and the beloved seems to love it. 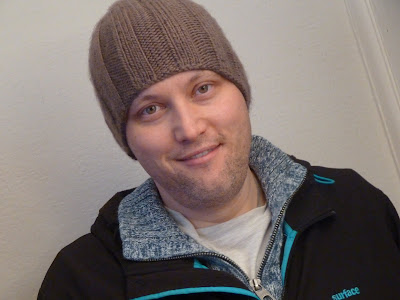 
It's tricky making a surprise gift for someone you live with but there was a conference he had to attend in late November which gave me just enough time to squeak in this little beanie. It was worth the rush for the happy surprise on Christmas morning. Third time making this pattern. Still a winner in my eyes. And in his.

As he is known to tell me plaintively from time to time he gets relatively few hand knits compared to the amount that leave this house.  Bad neglectful me! It would be hard to imagine a more appreciative recipient. Often seen wearing a pair of his socks about the house. Cold weather rarely sees him without his scarf and one of his hats. This is the favourite, going strong from 2007, hence the repeat. I think this one has been retired now. His Iphone is always toasty warm and I think this was his last knift so it was about time. In fact I think the only knit that hasn't seen serious use are these. Even these were delighted in but I don't think such mitts cut the mustard when you cycle which is the only time he really wears gloves.

Maybe 2012 will see me flout the boyfriend sweater curse, with over 13 years on the relationship clock I'm sure we can make it, though he's a big guy so it'll have to be a chunky yarn if it's ever to see the light of day!
made by me

Rachel said…
How great that he loves your hand-knits! The hat is perfect and fits him great!

Rose Red said…
So good he appreciates the hand knits - sounds like a worthy recipient of a jumper (although cheeky me channelling Beyonce says if he wants a jumper he'd better put a ring on it! Tee hee!)
3 January 2012 at 07:25:00 GMT