- August 07, 2009
Thank goodness that step by step, stripe by stripe I've finally made it to Friday. I've been so tired all week that some evenings one stripe of five rows was a tall order but little by little a good life is accomplished and its really good to have another FO. 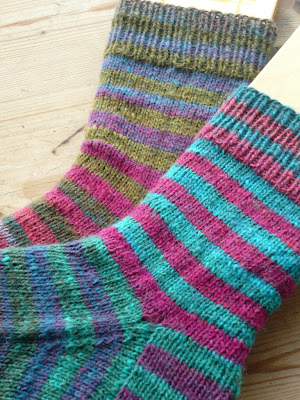 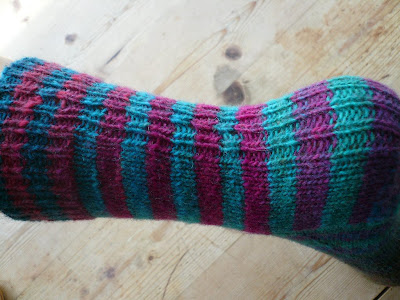 I used the stationary jogless stripes technique from Techknitter to try and minimise the jogs where I changed colours and I hid them in the rib at the back and on the side/sole of the foot.

I'm really happy with the first half of both socks but the foot of each has its issues. 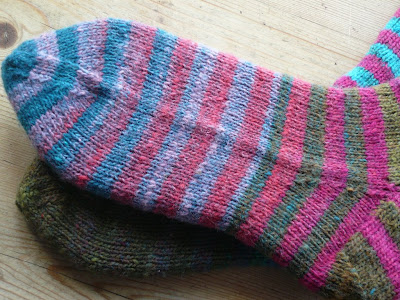 The much bemoaned Noro knot issue - why for the love of all that is wonderful about yarn can they not rejoin at the same/similar point in the colourway after a break? I didn't like to do that myself as I wasn't sure how much yarn I would have to pull out but I had a lot left over and it would have been worth it I think. Still I could always make sure the next sock was perfect couldn't I? 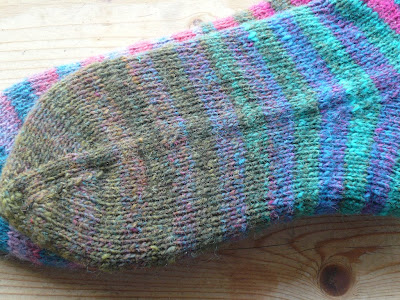 Nope, I left the yarn to its own devices again and it ended up striping two very similar parts of the colourway against each other. I much prefer the zingy contrasts than this subtly, murky merging. I should have pulled out a section of the colourway. I didn't because I'd have had to have ripped back a bit to make it look right and in a week when you need to just keep one foot falling in front of the other ripping back seems like it might send you spinning off who knows where in the time-space continuum! Also I'd just had enough of knitting with the yarn by the time I worked out how similar the stripes were going to be and just wanted to get them done. So they are, and you can't feel too badly about stripey socks like these can you? 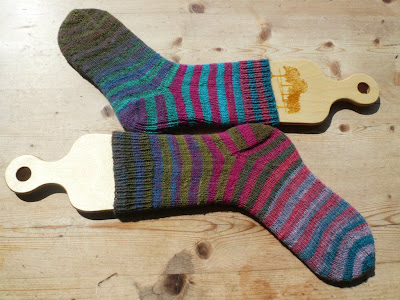 Caffeine Girl said…
I think they came out beautifully. No one but you would think twice about the stripes!
8 August 2009 at 01:40:00 BST

twigletqueen said…
Ah, my heart goes out to you. I got a knot in my Noro too, I nearly threw it out of the bus window in frustration. But the stripes look so pretty anyway, and hey, you can hide the weird join in your shoes!
8 August 2009 at 10:17:00 BST

Rose Red said…
You know, despite the knot issue and the slight murkiness, I think these are A GREAT PAIR OF SOCKS!! I love the stripes and the mismatchedness (T., that is TOTALLY a word!!). I think they are very cool. I hope you'll wear them with Lady E. I don't think you can ever have too much stripey/colour!!
8 August 2009 at 10:55:00 BST

Bells said…
sometimes leaving yarn to its own devices (love that idea!) works and i reckon it worked a treat here.

DrK said…
they look fantastic, but i feel your frustration. almost everyone says this about noro, so i have avoided the sock yarn myself, but these socks really make me think twice, they look amazing!AND, they're finished! yay!
9 August 2009 at 01:55:00 BST

dreamcatcher said…
I absolutely love the socks, Noro stripiness is one of my favourite things in knitting!
13 August 2009 at 15:53:00 BST

Rachel said…
I keep hearing this about Noro...sorry for the frustration. Regardless, I love these socks. I keep seeing similar ones around and want to make my own pair of stripies sometime soon!
21 August 2009 at 05:06:00 BST