- August 14, 2009
Well it's taken a new digital scale, paper and pen and I've had to get the calculator out for the Arisaig yarn calculations, not enough fingers and thumbs available! Assuming my maths is correct I have plenty of yarn and now I have relinquished my goose egg goal in favour of always having something on the needles I am excited about this! 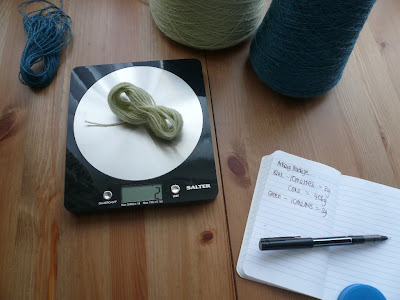 To help me remember and in case anyone else didn't know how to calculate yardage from the weight of yarn I'll set out what I did. ( I think I read how on the Yarn Harlot blog a long time ago. I had a snippet of text about this saved in the patterns folder on my PC for the day it would come in handy - sometimes I think I'm wasted in my current role of minion of the world - with such forethought and organisation I'm sure there should be a leader space open somewhere? Just so long as it doesn't involve too much maths I'm set.)

I measured 10 metres off the cone and then weighed it. In the case of the green yarn this weighed two grams. The cone weighed 479g in total and so allowing for the weight of the cone as 37g based on the estimates on this site I have 444g of the green in total. 2/10 = 0.2g for the weight of one metre of yarn. 444/0.2 = 2,220 metres of the green yarn alone. As the size I want should take around 2,013 metres according to the pattern and as I have one sleeve already knit (plus 1,240 metres of the blue yarn) everything is looking rosy. After all this agonising let's hope the knitting goes well!
yarnery

Leonie said…
I've been using the digital kitchen scale for my stuff, but if I had to do calculations like yours I'd be tempted to get one that the batteries don't fall out of! Happy knitting on the Arisaig, it will be great to see it finished, it looks gorgeous on Rav. Oh and won't plain sleeves use less yarn than the lace sleeves would?
15 August 2009 at 08:09:00 BST

Anonymous said…
Ooh, good luck with it! I'm not very good at maths; the logic of which numbers you multiply or divide is lost on me and I get the most ridiculous results. Looking forward to seeing the finished Arisaig. :) I have many overdue projects too, perhaps they should come out of hibernation soon...
15 August 2009 at 19:00:00 BST

dreamcatcher said…
See, I knew maths could be useful somewhere! Look forward to seeing the finished Arisaig!
16 August 2009 at 14:33:00 BST

Kyoko said…
Very clever. I must admit that I have knitted something and run out the yarn just before it...(that was painful!!!) so I have learnt the lesson... Just saw Arisaig top. It is beautiful!!! I love the pattern.

Marie said…
I love calculating yardage with the trusty scale. I also use it to figure out the yardage in a swatch, which is so much easier than ripping the swatch all out and measuring it bit by bit.
17 August 2009 at 20:18:00 BST