So about the shrug...

- March 27, 2009
...it was finished and worn to the wedding but I've been holding back on letting it make it's blog debut as I have been engaged in an internal debate about whether I'm really happy with it or not. Well I say internal, I have pinned some of the near and dear down and discussed it with them but their interest in how many rows of ribbing would be optimal and which precise bind off technique I should have employed and why has been lacklustre to say the least. The wise just kept telling me they liked it. 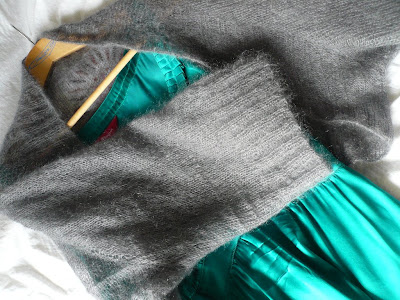 In the end it's going in the winner pot. If I made it over I would add some extra ribbing as I didn't love the way it looked when I tried to fold it back. To my mind this would also help prevent it's tendency to migrate backwards as there would be some more weight around the front. I know I could undo the bind off and add some more rows (and replacing the bind off with a sewn bind off which would also be preferable, as the edge is just a smidge tighter than would be ideal). However, having carefully weighed the pain involved in unpicking x-hundred stitches of clingy, stringy Kidsilk Haze against whether I will continue to wear it as is, I have decided that it really is a triple A star, award winning champ of a winner. I do like an easy life - and having finished my first 'sweater' of the year I'm definitely in favour of leaving well alone. 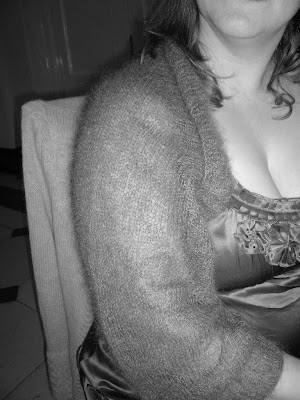 Now here's a puzzle for the blog - I calculated the yardage I would need based on the Cascade 220 that the pattern is written for. I assumed as I was knitting at basically the same gauge and air was effectively filling in gaps where yarn would be with the heavier weight yarn I would need the same yardage. However I found I needed substantially less - am I missing something obbvious in how I should have calculated the yardage? Share your wisdom with me bloggy friends. 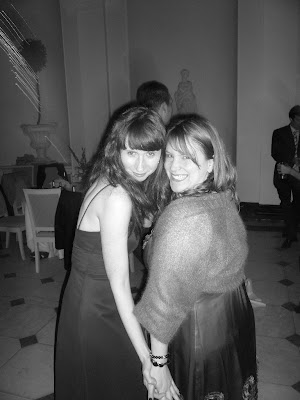 florencemary said…
I think your shrug looks perfect on you - what a great final photo! I love KSH - the shades, the look, everything... except, ripping back! I can tell you from experience, you will have extreme problems with ripping this baby back; so there, it must stay as it is.

Julie said…
Definite win. Looks lovely, and that's what matters. (Well, that and it's not unraveling, a double win!)

I personally wouldn't consider picking out Kid Silk Haze for anything less than... I can't think of anything I'd tear it back for. Even a gaping hole, I'd graft rather than pick back. That stuff is evil. Youo did a great job working with it.
27 March 2009 at 20:51:00 GMT

mooncalf said…
I had a look on Ravelry and it looks like most of the projects on there used between 2 and 3 skeins of Cascade 220 (or similar) which is about the same yardage per 100g as you get in a 25g skein of KSH.

I don't know what the pattern says you should have used but I'm guessing it is an error because it looks like you used roughly what everyone else did!
27 March 2009 at 21:25:00 GMT

Anonymous said…
Beautiful job! Looks gorgeous. As for the yardage, perhaps there is something up with the row gauge that also changes things? Or else maybe the universe messing with you...
27 March 2009 at 21:47:00 GMT

Geek Knitter said…
Oh no... just the idea of ripping out KSH has made me come over all dizzy. We do not speak of such things!

Kai said…
I love it! I think it looks fab on you.

As for the yardage.. I would have to say that my thinking is the same as yours. If you have gauge and it works out around the same weight, then the yardage you use should really be the same!
28 March 2009 at 17:24:00 GMT

Anonymous said…
Well, I think it looks most excellent on you, and from your photos it absolutely deserves to be in the winner pot!
2 April 2009 at 10:42:00 BST