Made It! (Part Deux)

- March 23, 2009
This "it" being the cushion deadline - made it comfortably in time for the Saturday wedding - and not so comfortably, literally just before my sewing machine broke! 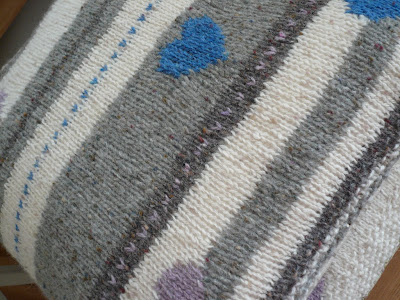 I was just contemplating a very wonky seam which sucked in most of a moss stitch border and debating whether if I unpicked it I could get it any better when the needle on the machine started zipping up and down as if a phantom machinist was sat with her foot firmly on the pedal. Having first blamed the cats (who looked up innocently from the sofa) for stepping on the pedal the only way I could stop it was to pull the plug from the wall. To be honest the timing of the breakage saved me from fussing around any further, the seam was well off but not so that I couldn't bear to gift it like it. A little bit of handmade wonkiness doesn't hurt sometimes. Let's call it character. 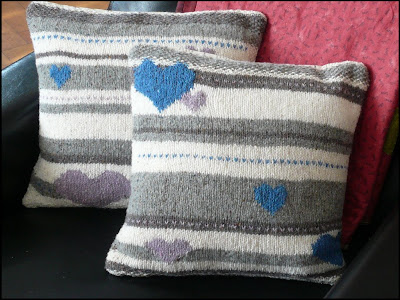 These were so much fun to make - my first go at a little colourwork which I really loved, watching the pattern emerge in the knitted fabric is a really satisfying experience. I had a few pulling issues, normally when I was trying to strand the yarns behind the hearts to minimise sewing in the ends. For me I'd say sewing in the ends was less of a pain than trying to strand loosely and not let it show through on the front; something I'll try and remember for my next foray into intarsia. The panels came out very close to my imagining and were a simple, relaxing knit on the whole. 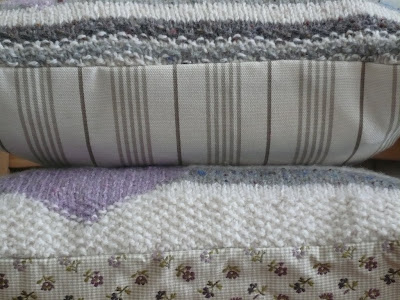 Sewing the backs on was much more challenging for this novice, and I'm in no rush to sew knitted fabric to woven again. However it was great fun material shopping with my Mum and I'm definitely going to try and expand my machining skills (just as soon as the ghost has been exorcised by the repair man). 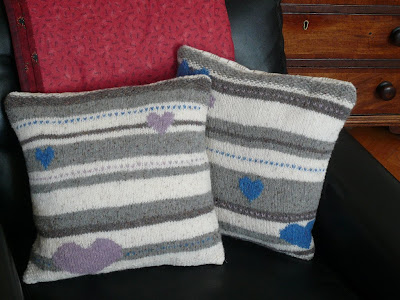 made by me stitchery

The only task I have ever been able to reliably perform on a sewing machine is the sewing together of my fingertips. After the third time my mother became much less keen on teaching me to sew...
23 March 2009 at 19:12:00 GMT

Bells said…
oh aren't they LOVELY! Perfect match on yarn, design, everything. I'm sure they were greatly appreciated!

I think when I sewed a knitted pillow front to a sewn pillow, I hand stitched it. However, I machine stitched two fabric pieces together, making a complete pillow cover. Then, I hand stitched the knitted front to the sewn pillow. I found it much easier to work with. ... Just in case you try it again.
24 March 2009 at 12:37:00 GMT

MonikaRose said…
G'day, I just love those pillows, both sides, fantastic. Thanks for sharing.
Have a great day and week ahead.
MonikaROse
25 March 2009 at 05:23:00 GMT

florencemary said…
Gosh, you are so clever! Love the blue and violet hearts and you are so brave to negotiate the knitting/sewing thing! For me sewing = yuck.
25 March 2009 at 20:29:00 GMT

dreamcatcher said…
The cushions are gorgeous! Hope your sewing machine can be fixed soon too.
1 April 2009 at 17:50:00 BST