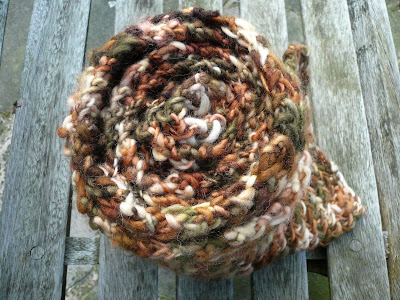 Hot on the heels on one gift scarf comes another. A rather fine one if I do say so myself. 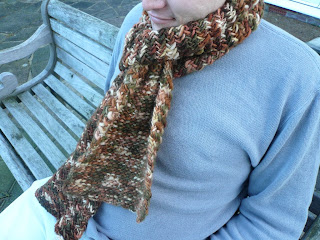 Pattern: My So Called Scarf cast on 40 stitches
Yarn: 3 skeins of Manos del Uruguay; shade 6709
I used long sections of alternating two rows and carrying the yarn up the edge to introduce the new skeins because of the striking differences in colour from one skein to another. 3 skeins makes a really big, handsome scarf.
Needles: 8mm Wooden Straights
Started: 28 December 2007
Finished: 26 January 2008
Notes: It was a good job I didn't get too far on the secret knitting of this 'Christmas' present as when I showed the beloved the couple of inches I'd managed he requested it be made wider. Maybe surprise gifts should be banned! I'm pleased with the final size of this - a manly scarf. Took some knitting but already worth it to see how pleased the recipient is. 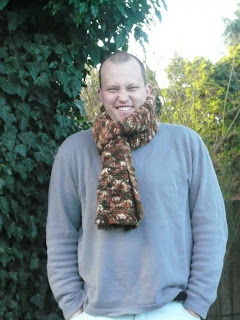 away made by me

Modelwidow said…
Lovely scarf, just as well you found out about the size before you`d done too much. It looks perfect that width.
28 January 2008 at 19:49:00 GMT

florencemary said…
That's such a nice scarf! I haven't tried that pattern yet or bought any of that yarn, but I love both. Mr Sarah looks dead chuffed!
30 January 2008 at 12:20:00 GMT

Anonymous said…
Gorgeous scarf. Seen it mentioned afew places lately so off to search for the pattern.
31 January 2008 at 21:02:00 GMT