- March 02, 2012
The Mr had a good claim on the next pair of socks to be made. According to Ravelry I last made him some socks back in 2008 - 16 pairs ago! Searching the webs for a pattern seemed like too much effort and I had no man socks in mind so out came my old trusty sock knitting manual - Sensational Knitted Socks and I thought we were away. 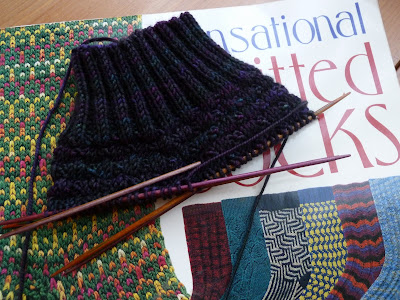 Turns out my memory really isn't so great.  As well as assuming I knit his last socks last year or the one before at a push I forgot that this man has skinnier ankles than any six foot six giant in the world. I cast on 80sts in a woven stitch and they were looking LARGE. I had a thought of saving the ribbing but when I put it on yarn for him to try sense won out and I went back and cast on 64sts. If only I'd checked Ravelry first - the last plain socks I knit for him were over just 60sts. Ah well we're away now in Waffle Stitch II, a ribbed pattern for increased cosiness around those twiglets. Simple but rather smart I think.
yarnery

behind the ivy said…
Glad you got back on track with the socks! That waffle stitch looks so lovely and cosy. And can I just say how much I LOVE that yarn? Those wonderful flashes of colour through the black are just beautiful!
2 March 2012 at 18:16:00 GMT

Kai said…
I know what you mean about checking Ravelry before starting Man-Socks... I always forget and Ollie has skinny ankles too!!!
3 March 2012 at 11:09:00 GMT

raining sheep said…
It's funny because I just sent my mom the socks I made her and my dad phoned me immediately after they received them and requested a pair of his own! So now I need to go buy some man yarn!
4 March 2012 at 22:12:00 GMT

Lynne said…
Ah, we live and learn! thank goodness for that great tool called Ravelry. Sometimes I think the notes I write are inane but they really help when I come back months later!
24 April 2012 at 03:27:00 BST