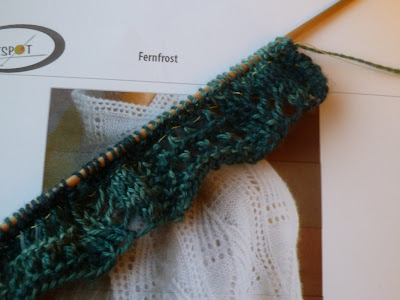 On Monday we did a strange shuffle around trying to think of an out of doors adventure we wanted to go on. Having concluded that we are bad at having fun it suddenly became clear that what was fun was close to home so we got our favourite take out lunch (Lebanese sandwiches from LBs) and then squidged on to the sofa. The Mr had wound some very special yarn for me and I finally cast on for my scarf. Long anticipated it felt suitably honoured.

Don't you lace knitting supremos laugh at my little lifeline up there. That yellow thread is where I got to on Monday afternoon and I'm so likely to make mistakes I wanted to make sure I preserve at least those few precious rows. I've managed just a couple more since and in the mindset that all good things come in time I won't be rushing.  It's an easier pattern  to be building up my lace skills with in that it's a small scarf, only one chart to follow, no provisional cast on, no borders to add later and no fancy stitches like nupps to work. Testing in other ways though - no rest rows and it shifts around a lot so it's hard to second guess what's coming next. A gentle stretch which is a good thing for my future lacy adventures. While I knit this pretty I'll put together that wish list of shawls and work out who gets to come next. In the meantime I think I'll enjoy this new time taker.

Lynne said…
Staying close to home sounds good to me. And even some experienced lace knitters I know use life lines!
8 February 2012 at 22:34:00 GMT

I always use life-lines in lacework - and they have 'saved' my life in a few instances, but they are a good 'insurance policy'. After all, you don't want to waste the precious time you invest in your creations!

DrK said…
oh i dont do any lace anymore without lifelines! learnt that lesson the hard way. even when i think its going to be alright, or its only a few rows, in goes the thread. its just too disheartening otherwise. and slow and steady is always a good way with lace. your monday at home sounds divine!
10 February 2012 at 09:45:00 GMT