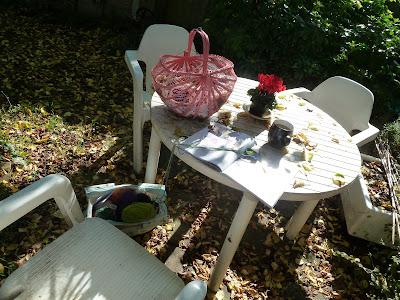 I've had a deliciously lazy afternoon. A soothing mix of catching up on Saturday night TV with a sock in hand and crocheting in the garden. I've been hurtling along of late and my crafting has been suffering. I don't think I'm built for hurtling, or at least I need some breathing space between hurtles. It's been the busiest year somehow. Work and fun. A lot of work which of late has at least been a lot more fun. Anyway a bit too much stuff that has kept me away from hooks and needles and blogs. I think this autumn will bring more crafting time; I'm determined it will. It scares me it is October already though this heatwave is helping my denial. It's good to rediscover that life feels less out of control with a crochet hook in hand.

Rose Red said…
I feel really wrong if I don't get in some knitting or crochet every day. Hope it helps you feel better about all the hurtling too.
3 October 2011 at 13:00:00 BST

Lynne said…
Don't hurtle too long; listen to your body, it knows when you're approaching "enough" (ask me how I know!!).