- June 19, 2010
When I unearthed the Spring 2010 Interweave Knits from the bedside pile that covers the bedside table last week it felt like a serendipitous rediscovery. None of the patterns had really made a big impact on first glance but Melissa Wehrle's Double V Cardigan was suddenly just what I was looking for as the summer cardigan my Sublime Soya Cotton was made for. Some searching in Ravelry had not found anything inspiring - I'm not sure I'm really using the search properly - anyone with any tips? For example why it didn't pick up this pattern when I advance searched with the filters of cardigan, DK weight and cotton? Still, it was very exciting to find the perfect pattern in a magazine I owned. 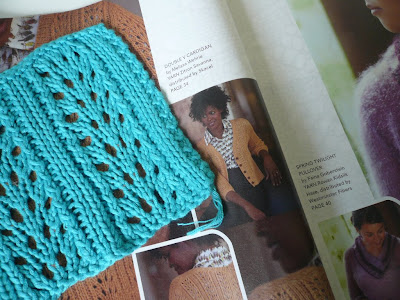 I knit a good size swatch yesterday, washed and blocked it (feeling oh so proud [some would say smug and thus deserving of the fall that we can all see coming] of my conscientious self) and then realised that measuring a lace pattern swatch is a dark art. Initially I was measuring 23 stitches as five rather than four inches but if I pulled it down a bit (as I reasoned it would pull down during wearing) then I could make it measure four, or pretty much any number from a shade under four inches to over seven!

Feeling somewhat dispirited, (like the England football team some might say) , I left it until this morning to make a decision on whether to downsize the needles for another swatch or press on. The conscientious knitter in me decided on swatching only to find that I had knit the first swatch with 4.5mm needles rather than the required 4mm. Gah!

So have I knit the swatch with the right size needles? Welllllll no, should I? I'm dithering. I'm thinking that I can make the swatch the right set of measurements, whatever the truth of the garment will be, so perhaps I should just get on with it with the right size needles. This baby is going to drape round the curves no problemo, in fact I'm now concerned that it may be a right saggy monster when it's done. To judge by this sweater it might turn out to be a pricey adventure if I need to buy a tumble dryer to make it fit! Egads should I knit a size smaller? Oh the joys of gauge.

I wish I had been more reckless and just pressed on already!! Though then I would have been using the wrong size needles, so perhaps a touch of caution will stand me in good stead. Ah I think I'll just go knit on the sock that didn't get much action in Berlin, fitting garments might just be beyond me to judge by the early signs of the LeMavens shrug, still we're waiting on the post blocking try on before we declare that one a lost love!
yarnery

Rose Red said…
I too have that magazine and I tpp had not given yhat pattern a second look - but now that you mention it, it is really nice!

Anonymous said…
i hate swatching too but have been more disciplined in that regard lately. i think its a good idea. in my experience, however, if you are not a twig, lace cardigans sag like nothing else. cotton, being heavy, even more so. so you might be safe just to go down to the smaller needle and be done with it...
19 June 2010 at 23:05:00 BST

sara said…
I'm becoming a swatch convert. Though in my opinion, it isn't an exact science. I *have* had more sweater success since I finally succumbed to the swatch process, so I guess in the end it's worth it.
19 June 2010 at 23:46:00 BST

Kyoko said…
Oh, I have the same dilemma every time I knit!!
I would swatch it to be 150% because it would save you so much work afterward should the gauge not right.
However, I am often quite lazy that when I know the different needle would definitely be right, then I won't swatch (i.e. swatch as I knit along..). Good luck :D
x
Kyoko
21 June 2010 at 09:24:00 BST

Rachel said…
Hmmm...I felt the same way about the summer IK. Thinking maybe I should give it a second glance as well (not that I don't have hundreds of things I want to knit already)! That's a beautiful blue yarn you are working with.