- October 13, 2008
...how do your socks grow?
Well quite slowly actually now you come to ask as it seems that I used most of the weekend when I wasn't snivelling into a tissue to knit a snood.* I know it is Socktober when sock love is official and I don't normally need an excuse to knit socks but my brain wasn't up to small needles so I got big uns and just knit until: 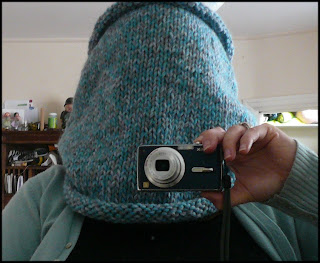 A polar explorer's snood fit for a gardening mad Mama. Well from one set of bandwagon knits to another, I've been unconvinced about cowls but they are lovely to knit so I'm glad that my Mum is convinced about them. I did want to make a really generous size so that it could perform the snood function of making a hood 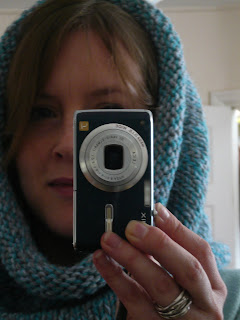 or sit snuggling warmly around the neck. I can confirm that it is very toasty and that is why you aren't getting any better photos as I had to remove it before I overheated. 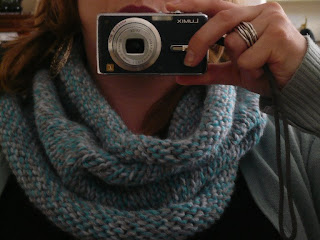 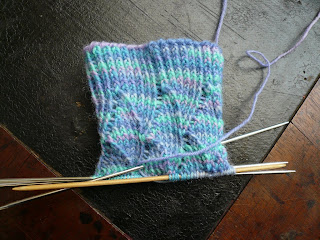 So snoods aside I have actually started two of the three socks I plan to do this month; one pattern repeat in each on the Poms and the Monkeys and am loving the speed of the Monkeys in comparison to the 1x1rib of the Poms (had not really thought how slow that might make them to knit). Am doing the original Monkeys this time around but I think No Purl ones won't be absent from All Fingers and Thumbs for too long. 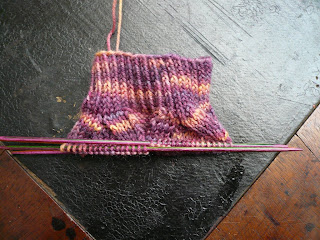 away made by me yarnery

Amanda said…
I haven't knit a cowl yet eeither, but this post makes me think it's the perfect simple project for showcasing a beautiful soft yarn.
13 October 2008 at 19:51:00 BST

Anonymous said…
Love the cowl/snood! I must admit I found the Pomatomus somewhat tedious to knit - not just the 1x1 ribbing but all the knitting into the back of the stitches too. Good luck with them!
13 October 2008 at 20:01:00 BST

Marianne said…
Love the snoodie :^) I think you should knit one for yourself, out of the same yarn because you look Mahvelous in that colour!
Poms looking great as are the Monkeys!
13 October 2008 at 20:16:00 BST

I must admit that I like cowls which fit 'snuggling warmly around the neck' (nice description, girly!).

Rachel said…
Nice cowl--I think I like cowls more than scarves...more functional in my world! Nice start on the socks, both patterns I want to knit eventually!
13 October 2008 at 22:18:00 BST

Rose Red said…
Snood is a clearly a much better word than cowl!!

Lynne said…
Lovely snood - I could see it would be a very useful item in the English winter.

Glenna C said…
Nice! I have been eyeing all these cowls over the last few months, thinking how nice and versatile one would be. Maybe soon, now that chilly weather is close...
13 October 2008 at 23:30:00 BST

Artis-Anne said…
Thank you so much caraid for mentioning my blog as one you love to visit , goodnes knows why with my latest feeble efforts.
I have to say that I too am hooked on cowls but then I was last year too and made quite a few , so guess what ? I am making yet more this year for the same reason you said , they are quick knits especially as Xmas gifts :)Only difference is they willl all be in handspun this time
15 October 2008 at 08:40:00 BST

Kath said…
Cowls are great!!! As is yours - and the hoodability of it is perfect! The Monkeys are looking fab too - it is such a great pattern. Not thought about Pom's being slow with all that rib, hmmm - might put that one off for a bit!
15 October 2008 at 09:53:00 BST