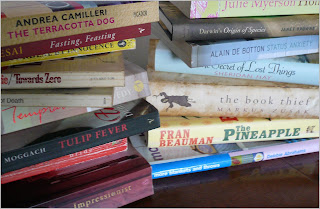 I seem to have spent most of the weekend collecting items that will compete with my knitting time via two charity book sales and a car boot. Knitting has about halved the amount of books I've got read this year - I think they're staging a fight back! 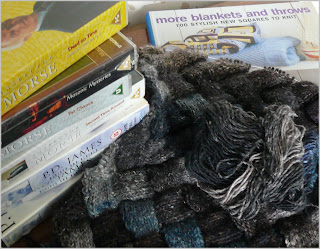 The knitting did get a look in though: I managed to find one bargain knitting book which seems good fun, a stack of murder mystery videos to provide something to knit to and some actual knitting in the form of Lady E.

I had meant to complete the legwarmers for my friend for Tuesday but forgot to bring the next ball of wool along for the ride. It's lucky these are a really quick knit as I don't want to gift them with the needles in as I do think that would detract from their snuggliness.

There is always such competition for the precious free time isn't there? I empathise with those of you that are too committed elsewhere at the moment to sign up for Pay it Forward, however I've only got two of my three peeps on board so far - Von and LittleLou. Anyone else game? I promise to make you something nice eventually ;0)
yarnery

Glenna C said…
Nice job on the book sales! I can hardly resist book fairs/used book stores either, and I think books are the thing that have the most other "stash" competition for my yarn ;)
23 September 2007 at 22:26:00 BST

artyfartykat said…
Books are as addictive as yarn! I have trouble parting with them after they've been read, and like glenna c, are in stash competition with the yarn!
24 September 2007 at 13:31:00 BST

Lolly said…
Ooh, love the books! I have so many shelves of them - knitting has definitely cut into my reading, but I try to find a balance.

Janey said…
I think you were right about the leg warmers...gifting them with needles still attached might have been just a tad prickly!
24 September 2007 at 22:39:00 BST

Piglottie said…
My reading output has taken a bit of a knock since I started knitting. I try to read for at least 30 mins before I go to bed though. And I find that audio books are great - books and knitting together. Our local library has quite a good selection.
25 September 2007 at 11:39:00 BST

Tusa said…
I know what it feels like. I still have not read the latest Harry Potter yet I have a copy...