Out of the frying pan and in to the fire 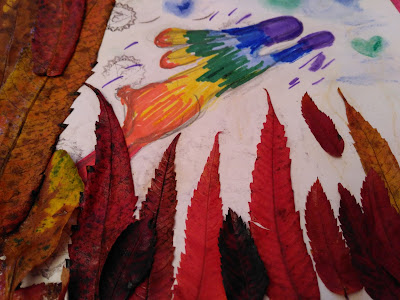 I was having a chat with my very wise and lovely friend Kelly the other day and we touched on the proverb "out of the frying pan and in to the fire". We both concluded that given the choice, sometimes, the decisiveness of the fire has to be preferable to the frying pan but getting in that fire takes a lot of courage.

When I jumped from my publishing job I thought I was stepping out of the frying pan and going to sit happily at the kitchen table. I wrapped up my departure in stories of creative businesses I was going to start, arty jobs that would satisfy me and convey me gracefully from my ever decreasing life to one of joy and fulfilment. I see now these were comforting fairy tales I had to tell my mind. Distractions to let me jump in to the fire. I mean, the fire is so dangerous that our mind just wants us to keep as far from it as possible. Even if we are sizzling up like sausages in the pan, so uncomfortable in our own skins that we might burst, the one thing our mind keeps telling us is that we are surviving and we don't know that we can say the same if we leap in to the fire.

Turns out the fire was what was needed. Some innate knowing created the sweet stories I needed to rip up the life I'd created. I'd spent so long in the frying pan the option of a safe hop wasn't possible. I needed to get in the fire and burn up some of the rules and beliefs that had landed me in that frying pan in the first place. Destroy with conviction some of what had once served me and was now holding me in the pan of discomfort and making me smaller by the day as it eroded my vitality.

Today I'm feeling quite hearth side. Sitting warming my toes, gazing at the flames, thankful for the excruciating painful times in the last couple of years. Times that I wondered if I would actually survive and keep going through. I feel brave sat here basking in the glow. I know I'll need to get back in that fire sometimes. I believe I'll have the courage to do that rather than end up in the no mans land of the frying pan. I am learning to be bolder, all in. I have enchanting stories of grand adventures to tell myself now.
living well