- May 02, 2011
I've been lazing around all long weekend, such bliss, I'd like to get some better photos of Short Lucky for the blog but that involves me and him and more effort than can be mustered! Time to make do with a few that were snapped this morning in between me hanging out the washing and him making ramps for our creaky old cat to climb over the fence to visit her chums next door (who's in on the sweepstake for when she'll use it? Sorry, never's already taken!)
Talking of hanging out the washing - scuse the action shot  but this is about the nicest one of Lucky herself. 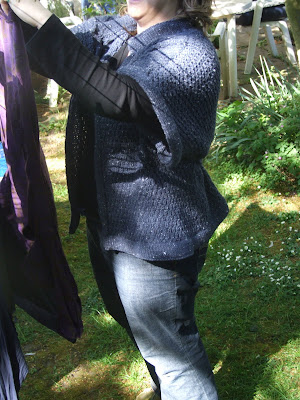 Yarn: Patons Wool Blend Aran - less than 6 balls
Started: September 8th 2010
Finished: April 24th 2011
Ravelry page
I was convinced I'd get most wear out of this top tied at the front - like this: 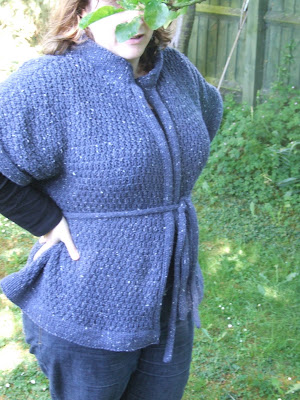 but my gauge was about 3.5 stitches to the inch instead of the pattern gauge of 4.5 so I've got a lot of fabric to spare and closing the fronts creates a bit more of a blocky, blobby effect than is desirable. 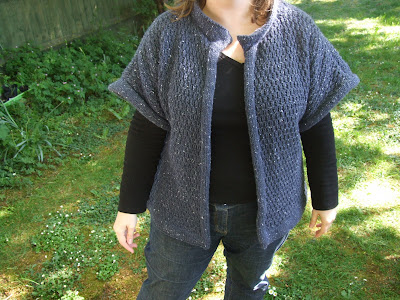 Open at the front tied at the back will, I think, be the way I get the most use out of this. 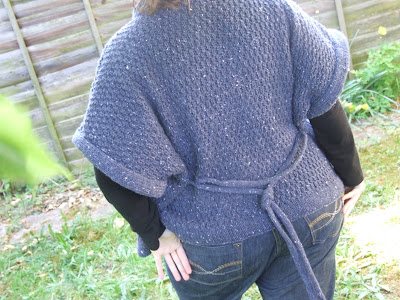 Makes you wonder why my gauge swatch was so far off doesn't it? Sigh, you guessed it - no gauge swatch! They may lie sometimes but at the end of the knitting when I've got something finished but the wrong size it does make me wonder what I was playing at when I started out on this enterprise. Ah yes, that holiday mood clearly had me too relaxed! So here's to holiday knitting and being VERY thankful it came out too big rather than too small!
made by me yarnery

Rose Red said…
I knit myself a vest cardi thingy last year even though I wasn't sure I'd wear it much, but I found I've been wearing it heaps this autumn. They are very versatile, I think yours will get lots of wear too, it looks great.
2 May 2011 at 23:21:00 BST

Bells said…
oh yeah too big is way better than too small. I love that you have had to post action shots taken in the midst of a long weekend - perfect really for a big, comfy cardi!
3 May 2011 at 10:52:00 BST

Anonymous said…
You're so brave! I would have been biting my fingernails the entire time I knit the sweater if I hadn't made a swatch.
Love the results!
3 May 2011 at 12:19:00 BST

Anonymous said…
meh, gauge. sometimes close enough is good enough. this totally works, and i actually quite like it closed. it really suits you. great colour too.
6 May 2011 at 04:03:00 BST

Lynne said…
Oh yeah, big is better than too small!

You've probably noticed that I've done a couple of posts about gauge over the last couple of years - sometimes we just need to force ourselves to do one! LOL
9 May 2011 at 03:26:00 BST