- July 03, 2009
An aptly named pattern - I've been very lazy in the heat of the last week and so missed the end of June deadline - though good news for me is that they can count for the July catch up month. I was determined to finish them tonight so that I didn't add another mountain to my Tour de France challenge starting tomorrow. 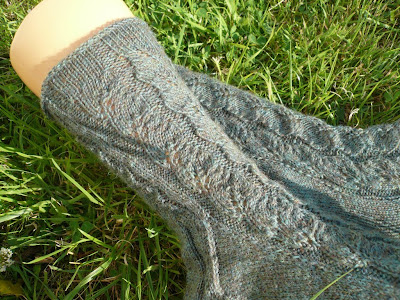 They were a little large for the sock blockers or stunt foot so a combination of both are employed to show the details. 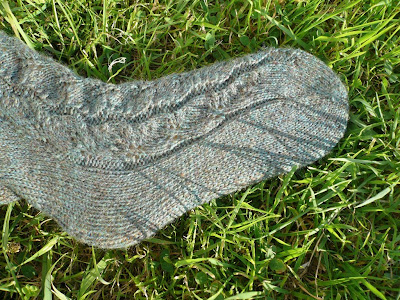 I'm a firm convert to Judy's Magic Cast-On after this and the sewn bind off definitely suits me. I need to try the afterthought heel before I conclude that my toe up sock recipe is perfected, the heel flap looks nice and wins for me over the short row heel but I don't think it's as much fun as a top down heel flap. Still I'm definitely more in favour of the toe up now, it feels a bit like learning to write with my left hand - I think I'll always favour the top down but it's nice to be sockily ambidextrous! 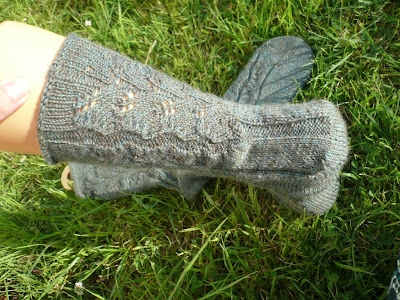 Lea said…
they are really nice aren't they? what is your tdf project? I think you might be right about making mine socks but I know I can do that and knitting a whole cardigan is a huge challenge for me. 5 cm done so far!
4 July 2009 at 11:44:00 BST

I agree about being sockly ambidextrous, it's very nice to use different techniques. I like the gusset/heel flap over short row heels too - but still prefer them top down too!
5 July 2009 at 06:28:00 BST

raining sheep said…
Those are beautiful socks...being a big sock knitter myself I truly appreciate a perfect sock. I have tried the top down and must say I am not a fan. Oh well. As you so perfectly put it: it is good to be ambidextrous.
5 July 2009 at 16:59:00 BST