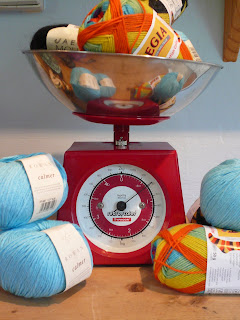 My latest yarn purchases have tipped the balance for the year towards more bought in than knitted up. It's not where I wanted to be but just setting the goal of knitting up more than I buy has made me think much more about my purchases and slow things down a bit. I've got time to redress the balance if I can find a little more knitting gusto than I've managed of late. I'm sure I buy more yarn the less I knit as compensation!
April and May are tough months at work with lots of client meetings and they've been taking their toll on this sickly child. It really is a question of balance here too (small voice mutters - as in kniting, as in life) but there is some reward on its way which will help to even things out. Two of the meetings are in Oslo next week. Two tough days but then I'm adding a three day break with the Mr. Bliss.
Hmm more yarn stores to explore means I'd better get on and knit some of this latest haul I think. The Rowan Calmer I got from Jannette's Rare Yarns and was totally delighted with the price and wonderful service. It's set to become a nice little summer shrug. The Regia Nation was from Web of Wool and again they were very efficient. I had tried to order it from Angel Yarns originally but they were out of stock and then they couldn't get any more from their suppliers - one of the colours I ordered still seems to be on their site which seems odd. I'd definitely stick with Web of Wool if you go after any of this super stripey stuff as with the free UK postage they worked out cheaper too. The stuff at the front knits up as rainbow stripes - featured recently on the Yarn Harlot blog. There's also a little bit of Jaeger mohair peeping out of the top - 3 balls for a £1 in the charity shop :o)
yarnery

Charity said…
I think balance is the key with yarn shopping - as long as you're comfortable and happy, that's all that matters! The Calmer looks lovely - I've never knit with it, but have heard so many excellent things! And you can hardly count the mohair! :0)
21 May 2008 at 20:29:00 BST

Sarah Ditum said…
Oh oh oh, charity shop yarn bargains are my nemesis. Everytime I vow to end the stash madness, something amazing puts its little yarny tendrils out of a secondhand bin. Those all look like eminently knitable purchases anyway - it's when you start stashing things with no conceivable purpose that you have to worry.
21 May 2008 at 21:54:00 BST

Rose Red said…
I love that Regia stripey yarn! I was not fond of stripes at first, but now that I've knitted stripey socks, I'm loving them more and more.

Donna said…
I think seriously addicted knitters all have the same problem, I know i do!!

raining sheep said…
I think I tipped that scale a while back...I don't think I can possibly wear all the socks I plan to knit in the future. I am at the point now where when I knit socks, I am thinking about a recipient in the back of my mind somewhere.
22 May 2008 at 14:01:00 BST

Curly Cable said…
Lovely yarn purchases, don't worry about the balance, yarn retail therapy is always a good thing especially when you've got stresses at work looming, best medicine ever is yarn :) I love the colour of your Calmer, and of course the yarn is superb to knit with, so you won't be disappointed. The Kaffe Regia stripey yarn is fab too :)
23 May 2008 at 11:42:00 BST

dreamcatcher said…
Calmer is a wonderful yarn, I've been eyeing up that colourway at Jannette's for a while :-)