- March 08, 2008
These are the knitted things that have kept me going this week.

In the wearing and even the washing - so much comfort 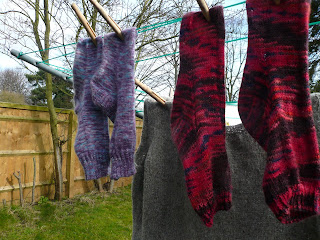 In the creating - achievement in finally mastering a new technique 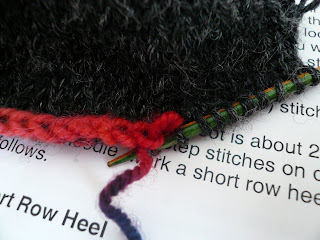 Yes indeed, that is not just a small bit of knitting, that is a small bit of knitting with a small bit of crochet attached and yes, the crochet is UNZIPPING! My provisional cast on actually undoing like it should. It wouldn't unzip last sock because I knit into the wrong bit of the crochet loop. This time round I looked at many pictures but it was still mighty tricky to tell which bit was the bump on the back for this non-crocheter. In the end I would knit a few stitches in, try and unzip, crochet a bit more, repeat until I felt sure I knew I was aiming at the right bit. For the record I tried and failed at both Judy's Magic Cast On and a looped cast on. Many times. Watch out though cast ons I'll be back. One day.

In the nearing completion - anticipation 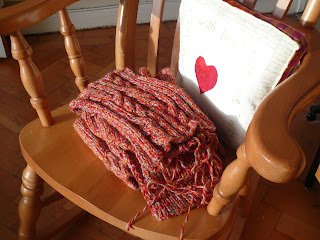 Here is a pile of of all the pieces of the Cabled Christmas Cardigan and right on queue here is a weekend in which to block them.

Hope it promises to be a good one for you. 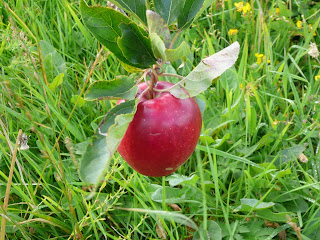 Janey said…
Isn't it a great feeling when something that you just can' do suddenly clicks? Well done on mastering the provisional cast on!

Marianne said…
Hee, feeling pretty clever now, aren't you :^) Good going!
Hey... where'd that apple come from?
The cabled cardi is such a pretty colour... now step up, get it blocked and finished... :^)

Charity said…
Yay! That successful unzipping can make you feel so clever! :0) Love the pile of cardi pieces - enjoy working on them this weekend!
7 March 2008 at 22:09:00 GMT

Rose Red said…
Yay you for unzipping! I'm quite scared by the idea of a provisional cast-on. Will have to give it a whirl one day!

dreamcatcher said…
Congrats on mastering the provisional cast-on! Not done one properly yet myself but soon ...

florencemary said…
I've never managed to unzip a provisional cast-on properly, so I will bear in mind your advice about stitching into the 'right' bumps! I had suspected it was me doing something wrong...

Bells said…
My first provisional cast on ripped out pretty well too. I never really believed it would and it did! Well done!
8 March 2008 at 20:32:00 GMT

Terrie D. (StarSpry) said…
Congratulations on learning a new technique! I haven't tried a provisional cast on yet.

raining sheep said…
Sarah, I love the colors on that cardigan. I am looking forward to seeing that all put together. I love pink...never wear it in clothes but I seem to be making a ton of socks in pink.
12 March 2008 at 14:04:00 GMT