- March 28, 2008
The fingers and thumbs have been twinkling away over the Easter break and I have two great cabled FOs to show for it.

This one has been a quickie and a goodie: 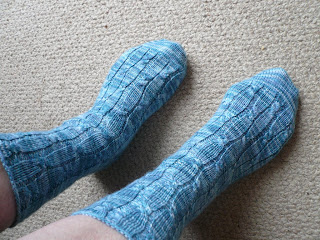 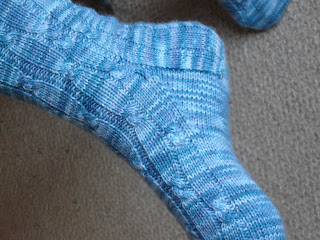 Notes: These were a really enjoyable knit for multiple reasons - back to my comfort zone of top down heel flap socks, great simple but effective pattern from lovely Anni, thick squishy yarn and those Harmony DPNs - smooth, pointy, bendy but resilient - I see much more of these needles in my socky future.

This one has been a slow goer and a baddie at times, triumphant in the end though: 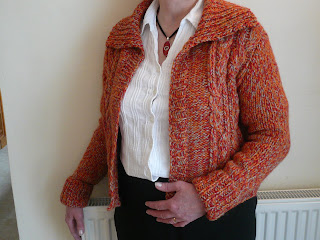 Pattern: Cabled Jacket
Yarn: Rowan Plaid - Spicy - about 5 balls
Needles: 6mm Plastic Straights
Started: 1 November 2007
Finished: 27 March 2008
Notes: Oh. This. Pattern! That sweater in the picture on Ravelry looked just the ticket for my Mama but the pattern is really best used as a starting point I think. It is a freebie and I think we are spoilt sometimes by the effort people make with free patterns - let's just say no-one did any spoiling with this one! 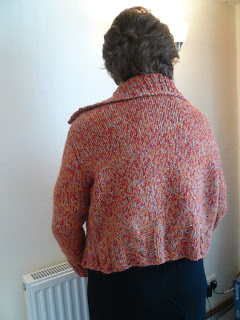 The pattern was in fact plain wrong to start with, I sorted that out (and I believe the corrected version is up now) but it was still mods all the way. I lengthened the body by about three inches and should probably have gone for about five even for my petite Mum; in a do over I would also add a little extra width to the arms - I was scared they weren't going to fit. I added the cabled ribbing to the back because I was sure the plain stocking stitch would just curl even after blocking. I had to rip back the fronts and shorten those because the pattern is very misleading and I wasn't thinking. I had decided to omit the buttonholes which turned out to be a stroke of luck as the fronts as written wouldn't meet in a month of Sundays and because the edge is just reverse stocking stitch they curled even after blocking. I ended up knitting on a ribbed edging which I think looks well with the collar. In summary? A challenge! Enjoyed at times and endured at others - in the end I am really pleased with how this looks - and most importantly so is the recipient :o) 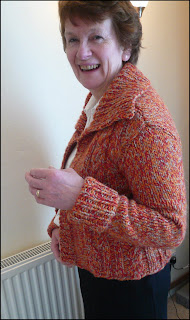 Marianne said…
The socks are Gorgeous, truly.
I love the cardi, you did a great knit of making it work out right and it looks lovely on your mum and she looks so very pleased, 'that' makes it all worth it, eh?
Well knit!
28 March 2008 at 23:43:00 GMT

raining sheep said…
SARAH!! those FOs are great. I love those socks...I might have to purchase that pattern and I have been dying to see that sweater. You are definitely having better luck with your knitting than I am. Awesome work.
29 March 2008 at 02:17:00 GMT

Lynne said…
The recipient looks pretty happy despite your misgivings!

dreamcatcher said…
The socks are gorgeous, what a lovely fresh colour!

Modelwidow said…
The cardi turned out really well, you must be very proud of your efforts and the way you sorted it all out. Very nice (and quick)socks too
29 March 2008 at 20:04:00 GMT

Bells said…
I think I need a pair of pale blue socks. I can't believe I have lived without them. Yours are just beautiful.

Rose Red said…
I love those socks - and you made them so quickly. Must print pattern and bring it to the head of the queue!!

And the cabled cardi really is fantastic. I can't believe you had to do all those mods in the first place! You've done such a great job, no wonder your mum is pleased!
30 March 2008 at 23:49:00 BST

blog-blethers said…
What fantastic FO's! The sock yarn shows the pattern beautifully. And I love the cardigan. What a lot of patience you showed with all the mods - but it was so worth it. No wonder your mum looks delighted!
31 March 2008 at 02:06:00 BST

Curly Cable said…
WOW!!! You have been busy, Your socks are superb, fantastic work and a lovely colour. Your mum's cable cardi is fabulous, I love it!! Well done on the alterations, your patience really has paid dividends, the cardi looks terrific and so does your mum.:)
31 March 2008 at 11:34:00 BST

Suzie Sews At DOTTY RED said…
WOW on the socks...amazing...as for the cardi, loving the colour and it looks great, hopefully the ups and down now seem a distant memory as its beautiful....
31 March 2008 at 18:31:00 BST