- December 03, 2006
As planned there has been a lot of knitting this weekend, and I managed to get over the finishing line on these three scarves. Yippee! 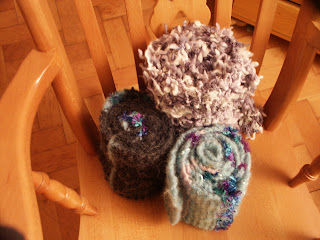 Two of these have been lingering just short of the line for a while but I just couldn't get interested in sewing in the ends - especially on the really stripey one, so many to do - and much more exciting knitting to be getting on with like my beloved socks. 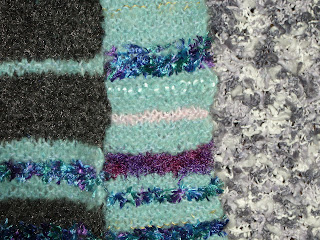 The scarf on the right is a bit of cheat to call a finished object of mine really as my Mum did well over 2/3. Thanks Mum :o) It is knit in Sirdar Curly Wurly in Charcoal which I absolutely hated knitting with, so it's a good job Mum came to the rescue to help it get done in time for Christmas. The bobbly nature of the yarn was okay but the base yarn is I think called a 'boucle' style yarn and I really hated the feeling of knitting this - as if you needed to get the dips in the yarn to meet together to make a successful stitch. Uggh. I used all five balls I had in the scarf, so it's a lovely great big fluffy thing and best of all I never have to knit with it again :o) The dark grey one is primarily some mohair-a-like called Sunbeam Sumatra which I picked up a big lot of on ebay. I've put in some stripes at the end in Wendy Shimmer and the pretty sea breeze yarn I knit my first scarf in. I kept the stripes minimal as I was a little striped out after the middle scarf which has that sea breeze yarn as the base. I really loved knitting that one as I added some lovely silky cord, pretty gold thread and several yarns, but it was so tedious sewing in all the ends that I think it'll be a while before I go so crazy with the stripes again. I'm a little disappointed with the edges which dip in quite a lot on some of the stripes as I didn't really know to try and match the yarns' tension, but it's all good experience for me.

I have finished the first sock and I LOVE it (with a worrying passion!) - the second one is cast on and I'm sure it'll be finished soon but I was as ever over ambitious to think I might do both this weekend. I'd forgotten how tricky I'd found it to get started on the last one in the terror of the heel but I'm away now.

I have ripped out half a scarf as I decided it looked ugly and it was boring to knit, still at least some of it survived and I'm feeling much happier with it now and thus it is progressing faster. 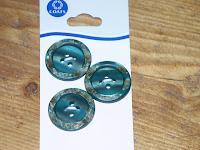 I also went to my LYS (see I know the lingo!). Sadly it's not great (thankfully I was warned) and strangely combines a limited selection of yarn and knitting/sewing accessories with a key cutters, toy shop and some baby clothes of a pre-fab non-handmade nature???? Oh well, at least they had some pretty buttons and a circular needle which I was after to try out this hat pattern for my brother for Christmas.
yarnery