- December 20, 2006
...well maybe not that fast actually, but certainly as fast as my clumsy fingers will go.
What a crazy idea it was to take up knitting in October, someone should have warned me of the overwhelming urge I would have to knit every loved or even just liked one a Christmas present. The list has been slashed in the last couple of weeks as the looming deadline has made me more ruthless and still I've had to wrap up one sock and an IOU, convert three presents into New Year gifts and I haven't even started on my Ma and Pa's as I'm not seeing them until the 27th, in my mind that is about a month away, rather than... can it actually be so... only 7 days! Perhaps I'll wrap up the wool I have to make things for them with, then it would be like they had two presents wouldn't it?!
Speed knitting has created this gift scarf in a fluffy mohair a like yarn - that is not this colour at all - it's a very rich, bright teal. I have more so I'm sure it will appear again hopefully in a month when natural light is easier to come by! I'm quite proud as I only cast on for this on Monday last thing, which proves to me how much improved I am at least in plain garter stitch on giant needles! 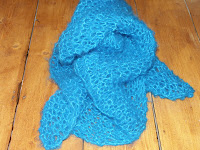 Anyway I promised a shot of the gorgeous yarn I picked up in San Francisco. So without further ado here it is: 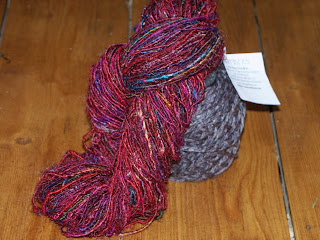 The colours are doing a bit better in this photo. Some of the jewels of the sari silk are a little dimmed but the feeling is right. It is called Sanskrit and is really divine. I only managed to find one shop within reach in downtown SF but it was a real gem called Artfibers. I squeezed in a quick visit when I was on a lunch break and would have loved to stay longer, and if it weren't for the need to buy Christmas presents - spend more! The grey yarn is called Sumo in colour no 9 and is 66% silk and 34% lambswool and feels truly glorious. I chose it to make the 1T.B. a hat and I can just imagine how comforting this will feel pulled down snug around the ears. It would have been a Christmas present but a January present is so much more original :o) The shop was really great, tucked away in the midst of skyscrapers and designer stores, a haven of peace and inspiration. They make/source all their own yarns and so I really felt I got the unique memento I was after. A lovely reminder of a lovely city. I really fell for the place despite seeing just a tiny fraction - far too much work to do unfortunately but I did try some great restaurants (great Asian fusion places), did a whistle stop tour of the modern art museum (v trendy), drank at The Redwood Room (even trendier) and laughed at the seals arguing at Pier 39 (v touristy!). Sadly I missed seeing the street of many bends - Lombard Street, the Japanese tea garden and hippy Haight-Ashbury and saddest of all Atelier which looked great and had the coolest name of any of the yarn stores I read about. Still I vow to head back as soon as I can and I'll be visiting Atelier then.

Am really feeling the affects of the jetlag - 8 hours time difference is too much for me - my body gets confused when the clocks go back so I expected it to be a challenge! Still I'm making it through the wakeful wee small hours by listening to knitting podcasts which I just adore. I'd never downloaded a podcast at all until I found BritKnitCast (yey have got episode 9 loaded up to listen to tonight) KnitCast and Cast On. Have added CraftLit to the family - thanks Kendra - and CraftyChica is fun when some more general craft and a dose of glitter is in order! I can't add anymore until I'm up to speed with these knitsibs - being a total anorak I had to go back to the start on them all :o)

acrylik said…
Wow, amazing yarn and your trip sounded fantastic. I have had a quick look at the Artfibers site and it looks like a wonderful place to visit.