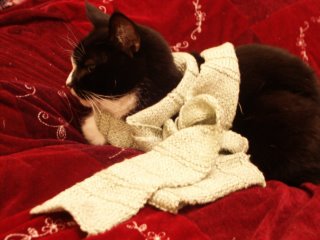 The first scarf hot off the needles was Miss Skinny Minny (modelled here by the lovely Lilith who remained patiently in position for all of six seconds), mainly done so that I could learn to purl. I'd started off with a plain garter stitch scarf in a turquoisey mermaidy yarn(see picture below) but I quickly found that having only one project on the go is just not cricket, or knitting as it may be. Miss S Minny managed to overtake and become FO1 by virtue of her compact and bijou nature making her a more suitable companion for a train trip to Birmingham. She is really a rather lovely sparkly, green which has not come out here at all - Patons Spritz Shade no:03002 (ohI wish all shades had names - I would call this Envious Disco Diva :) ) I was pleased to have a finished project on 27 October - about a week after I really got going with some decent needles and yarn and only 18 days from K day (when I hit pay on the Amazon order). 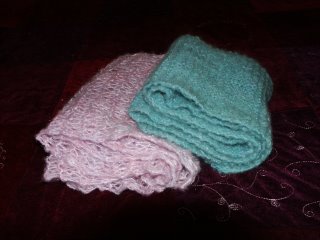 Is it wrong to feel so proud of something you have made? I seldom do after a bout of crafting - I'm normally wishing the object was a little more this or that - but not so far with my yarn creations.

Above we have two of the simplest knitted items in blog land but that doesn't make me any less proud. I love that I made something I'm genuinely pleased with - let's just hope my unsuspecting friends and family are feeling cold in the neck region this Christmas and share in my delight!

I really like 'big pink' as I have imaginatively named her as I was inspired to buy some 15mm monsters to knit her with to make her lacy and light. She's looking a little pale and peaky here - must be flashitis as she's a lovely mauvey pink when she's feeling full strength!

Sea Haze was FO2 but WIP1 so has a special spot in my heart. That and a couple of dropped stitches mean that she is mine all mine.

Not sure of the type of yarn for either of these as they came to me without a name, orphans adopted from ebay. They are a varying mix of wool and acrylic and nice and soft to snuggle into.

I shall save telling about FO4 for later- there have been a few more ups and downs on the path of her creation!