- November 22, 2006
This was it, the honeymoon was over. All my thoughts of 'knitting is so much easier than I expected' were out the window. I could not knit some simple ribbing! Literally knit 2 purl 2 and I couldn't do it, what was wrong with me? Was I some kind of freak? I tried to do a basic ribbed scarf - nice pattern in my kit book of varying ribs so you could practice. After several rows I just had a twisted mess and knew I must be doing something wrong but despite several feverish re-readings of the book I couldn't work it out. Off the mess came in a fit of pique and I resigned myself to another garter stitch scarf with some pretty stripes to cheer me up (still on the needles as other things keep jumping ahead!) 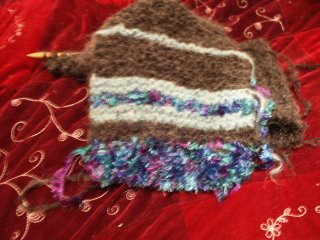 The following Sunday we went to my bf's parents for lunch and I plucked up the courage to ask his Mum, a very accomplished knitter, what I was doing wrong. I felt ashamed to admit to my freakishness but I had to get past this or my visions of goregous jumpers and cardis would remain just that! Turns out not a freak after all just a bit of a fool! Somehow I hadn't grasped that I needed to bring the yarn to the front or the back of the knitting before I inserted the needle. I was convinced my book didn't explain that, yet strangely on rereading it after we got home there it is in black & white...

Anyway I was off now, no stopping me, back on track - today ribbing, tomorrow.......increasing? Gulp!

So a few days later I thought I'll try a ribbed scarf again. Now this leads me on to the tale of the the three start scarf. (Bear with me, eventually we'll get back to ribbing because sadly it doesn't end with and then I knit a beautiful ribbed scarf, here see the pic!) I had bought some truly beautiful space dyed slub wool from The Kaleidoscope shop on ebay which has loads of very te

mpting stuff. So tempting that it had broken my first rule of wool buying for ebay within about 20 hours of it being made. Rule 1: no more than £1 per 50g until I had knit something tougher than a scarf. New rule 1 no more than £1 per 50g unless you really, really want it. At the time I bought this I hadn't actually knit anything and I was still wrestling with the bobbly nightmare yarn from my kit. You see I needed this wool as therapy, well look at it - I bet you want some ;o)
So this luscious wool arrived and rather than using some of the other plainer yarn that I also had by then I had to knit it. So I did. On 4mm needles. The ones from my kit as these were all I had. Of course you can imagine it really wasn't a great success. I took it to a knitting evening with one of the two bona fide knitters I know in Oxford and she said she'd never seen wool so big knit on needles so small :o( Out it came, row by hard knit row, by this time some of my needles from ebay had arrived and there were some 0's in there which I think are about 9mm. I knit away with my 100g and really loved it so I ordered some more of the same from Anna to be able to do a whole scarf. Strangely though by the time it arrived I couldn't get back into it and the skeins languished in the packet, I kept getting it out but I just wasn't keen to carry on, though I didn't know why. Then the world of knitting blogs enlightened me. I saw a scarf in Colinette Point 5 on a blog (break for hasty searching of fav blogs but I can't find it now, typical!) and it suddenly dawned on me that this wool needed some space to breathe. Thank heavens that so many knitters are such great bloggers, you really saved this yarn. 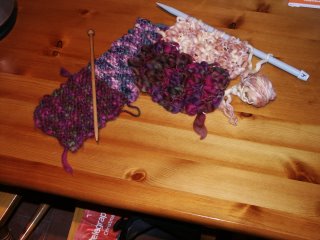 Although I had loved knitting on the 9mm needles in comparison to the 4mm, when I looked back at what I'd knitted up the amazing nature of the wool was lost, suffocated as it was still too tight. A few rows into the 15mm version I knew I'd cracked it! The wool was getting great lungs full of air and was dancing for joy.
So I was really proud of myself, it may have taken three starts but this was it now a ribbed scarf in the loveliest wool.
My Mum came to visit this past weekend and I proudly whipped out Mrs Three Starts and announced that I could do ribbing now. My Mum took one look at it and said she didn't know what I was knitting but it certainly wasn't ribbing. Oh my hopes and dreams crashed down again - this learning to knit business is one rollercoaster of a ride!
So Sherlock Mums investigated and turns out - now listen up here this is seriously complicated, I mean forget knitting two socks at once, master ribbing and you deserve the Nobel Prize for knitting I reckon - if you knit it on the right side you should purl it on the wrong side. Who knew? Well not me obviously! 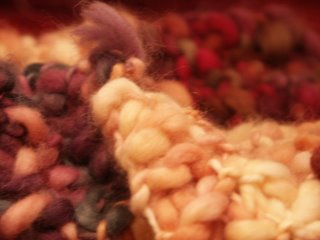 Oh well I dragged myself out of the dunces corner, thought I really must find a knitting class and proceeded to pump Mum for any further knitting tips. We both decided that Mrs Three could not become Mrs Four Starts and that the rib would be lost anway because of the huge variation in the thickness of yarn. I was feeling a bit better about my dunceishness as I think even I could have spotted no ribbing occurring in a double knit type yarn but in this beauty I just thought that was how it would look. Maybe there is a stitch name for what I did, beginner's rib? I proceeded to finish Mrs Three on Saturday and have been swanning into work with it on all week, my non-knitting colleagues are very impressed as they haven't spotted the beginner's rib, I think it's best to leave it that way! 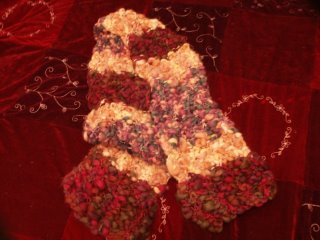 Sarah said…
Thanks Kendra, that means a lot as I've been over on your blog ogling all your lovely items especially the lovely cardigan with the ribbon at the back - Matilda? All these inspirational blogs are helping to keep me keen!
22 November 2006 at 22:22:00 GMT

Kelly said…
I made exactly the same mistake the first time I tried ribbing - where did all these extra stitches come from?! Luckily my mom set me straight on it early on.

If what you have been doing is K1 P1 on an odd number of stitches, and then flipping it over and starting with K1 again (or with an even number of stitches, flipping it over and starting with P1), then what you've produced is moss stitch. (A lovely stitch in it's own right, and great for scarves because it doesn't curl up around the edges like stockinette does). Though it is hard to tell admidst the fluff of that beautiful yarn! It is indeed a lovely scarf.
23 November 2006 at 16:34:00 GMT

Sarah said…
Fantastic I learnt a stitch without even realising!!

I tried to leave a comment on your blog Kelly but it never seemed to appear, it said it was pending post moderation? Anyway I just wanted to say that the project for Christmas sounds fantastic, it's great to keep traditional patterns alive.
26 November 2006 at 17:12:00 GMT