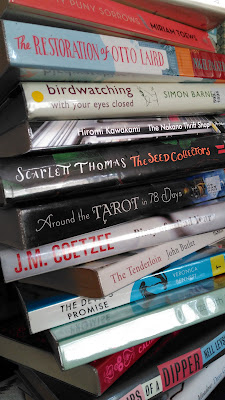 Just back from our three-weekly date night with a stack of new reads. Love the freedom in library picks, choosing on a whim, judging by covers, blurbs, mere fancy much more than when I am paying for a book. I find it easier to stop reading too if it doesn't catch my imagination. Back it can go and nothing lost.

Our little library visit has been a regular in the diary since my trip to the States last autumn. I visited two glorious libraries in Provincetown and Boston. Stunning buildings with huge collections that made you itch to just pull up a chair and stay all day. The previous summer I visited the most delightful gem of a members' library in Providence that seemed so perfectly formed it could have fallen from the pages of one of the novels it housed. They seemed to honour the beauty of the books that lived within them and like they would capture and create new bibliophiles second by second. I felt like our libraries paled into the background against these widely varied but equally glorious creations. Then I wondered if I wasn't just out of touch it had been so astonishingly long since I actually crossed the threshold of any of our public lending libraries.

So all inspired I renewed my local branch library visiting habits and it turns out it's still rather lovely in there despite the funding cuts. Other members of the public have not neglected it in the way I did. It's not in the league of any of the gems mentioned above but for a little area of a little city it's not too shabby. Though that is exactly what the public Central Library is. In fourteen years of living in this city I have been twice. The second time last autumn to see if my shock and dismay at my first visit in 2002 had really been justified. I think they were. It's a hideous building with a limited collection. Maybe our main library is designed to weed out the aesthetes, those who sort of like books but only if they can sit on a comfy chair and read one in natural light. Maybe it's to lending what Black Books is to retail. In a city famed for the universities libraries it's horribly out of keeping. A definite area where gown beats town!

There's something so nostalgic about library trips for me, so many things still feel the same. I basically lived in the Saltash lending library as a kid, was going to be a librarian, until I was going to be a lawyer which I researched in a book from their shelves. I loved summer reading challenges (those are still going strong). It was right next door to my primary school and for my whole childhood was a treasured visiting and meeting space. They had funny wire bucket chairs and it was a huge high, purpose built building with a roof that leaked into the atrium where the reference section was. Oh I should so go back for a visit next time I'm down that way. I still have a Cornwall lending ticket though I fear it may be defunct by now. I remember when we switched from our six little cardboard holders for the paper tickets to the barcoded card. These days we normally check our books out on the automated machine. Crazy! I do miss the stamped date though, nothing quite like the sound of the library stamp.
away bookery home living well