A Pair(ish) of Knee Socks

- December 28, 2010
The "ish" because of the very distinctly unmatching nature of these socks. Not, thankfully, because there is still only one and a bit of them. 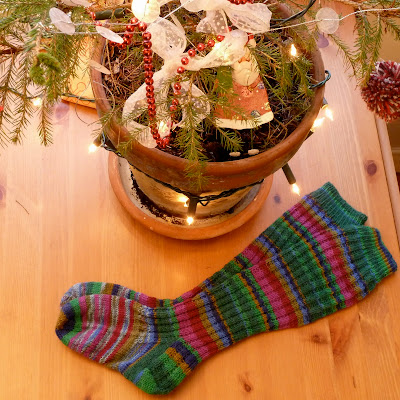 Pattern: My Own Knee Socks - Garter Rib Stitch for the legs
Yarn: Regia Kaffe Fasset Design Line - 4350
Needles: 2.75mm DPNs
Started: October 23rd 2010
Finished: December 25th 2010
Ravelry page
I never make the effort to begin the second sock at the same place in the colour repeat as the first and with a shortage of yarn these weren't the pair to start fussing about that with. I then also decided I'd refine the calf increasing on the second one to see if hiding the increases in the purl troughs of the ribbing was neater than the increases in either knit or purl had been on the first. Answer definitely yes to the knitter's eye but if a non knitter picked it out I'd be amazed. Despite my scrappy notes I think I matched up the shaping nicely, made the heel in the right place, had the right number of stitches for the foot. All tickety boo except I missed the rather obvious fact that the first foot was plain and carried on the ribbing on the instep as I was decreasing the gussets. I left it, all these little variations just add character and character is a big part of a hand knit isn't it? Identical socks are easy enough to come by at the shops after all.
There was just one thing I changed on the second sock that I did rip back and correct - the length! Character is one thing but having to fold the toe of your sock over to make it the right size might be taking that just a stitch too far.
I finished these up on Christmas Day, and a most delightful day it was. I hope everyone is having a fabulous holiday time. Much fun being had by me including the big chunks of knitting time.
made by me yarnery

Marianne said…
I LOVE your pair(ish) knee socks!!! I was giggling with delight reading about your 'journey' with them :^)
Wishing you Merry and Bright and Peace throughout the holidays and this coming year.
28 December 2010 at 14:42:00 GMT

Caffeine Girl said…
Hey, those socks are darn close to matching (pun intended!). I never thought about how hard it would be to increase in ribbing. It sounds very complicated -- but the socks look perfect!
29 December 2010 at 12:35:00 GMT

Kat B said…
I always say that the "mistakes" in my knitting just prove that it is hand knit and make it a unique garment.

Rose Red said…
Matching socks are for Losers! (no, not really, obviously, but you know!). I love mismatched but matching socks, and I think these are way cool!

Anonymous said…
gorgeously not quite matching socks! may they bring lots of smiles everytime the wearer puts them on!
1 January 2011 at 22:38:00 GMT

Rachel said…
I think they are perfect! I'm actually a big fan of mismatched socks so to me, the 'character' would just be a preference! Glad you got them done in time.
2 January 2011 at 20:24:00 GMT

Bells said…
you had a similar experience to me on these ones - I ended up buying more yarn in the end but there was a lot of fudging in the second one to try and get it right the second time around. One day I'll do long ones again to try and get it even better.
4 January 2011 at 08:43:00 GMT

Lynne said…
Wow! Those socks match beautifully - especially for someone who wasn't trying for a match! Well done Sarah.
7 March 2011 at 07:59:00 GMT