- September 03, 2010
.. to 'When did you become one of those people who get Christmas all organised by June?!!?' Well maybe not quite but here's my first gift knit all done, done, beautiful and did I mention done? By the start of September no less - gift knitting is go! 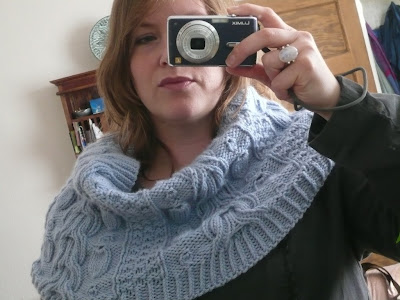 I barely noticed this cowl when I got the magazine last year but there are many lovely versions on Ravelry to convince you it's a winner - just not the way the magazine styled it. I showed a couple of people the magazine picture when they enquired what I was knitting and they definitely gave me the 'hmmm well she is a crazy knitter' look. This version by Yarn Snob was the one that made me want, want, want it. Sadly I wasn't able to live up to her great photos. I added a stunt jacket for mine as I felt foolish wearing a t-shirt and a cowl. Woman taking own photo in living room mirror feels foolish. Imagine! 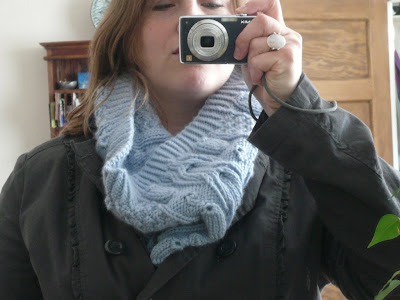 It's a great fun knit, simple but just enough patterning going on to keep you with it.  Though enlarge the chart if you value your eyesight and you like to follow a chart  closely even with a simple pattern(even though by the third repeat you'd really think you should have it down!)
It was a real must cast on for me as soon as the yarn  arrived - it's just the softest snuggle and better yet on sale all over.  I got mine at luvverly Kemps - hit the clearance section around page 15. It's not the best wearing yarn but a dream for neck wear and so pleasurable to knit with. 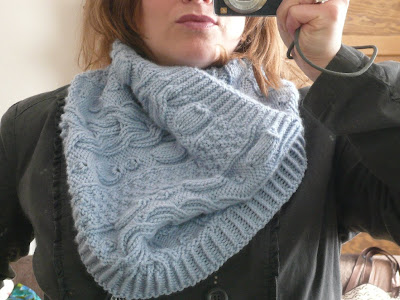 Anyway, all that wooliness can go away in the cupboard. We're off on our hols  to the sunny south coast and I'm going to pack my swimmers and enjoy the way September is trying to make up for our cold, wet August! Well, we (I) might not brave the sea but there'll be plenty of time on the beach, that, I can guarantee.
Must just remember to check case for stowaways before we go. 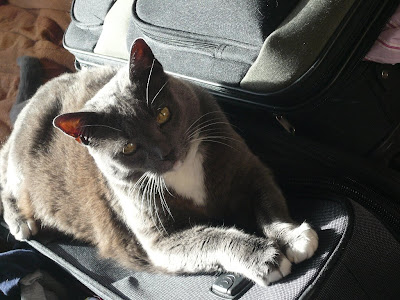 behind the ivy said…
I can't believe how organised you are! That is a gorgeous cowl. Like you, I didn't pay much attention to it in the magazine, but now that I've seen yours and yarnsnobs versions I might just have to add it to my queue!
3 September 2010 at 20:44:00 BST

Anna said…
That is just fantastic! In fact I love it so much I've just tracked down and ordered myself a copy of that VK. It looks great on you too - gorgeous colour, and love the 'stunt' jacket! Have a good hol.
4 September 2010 at 17:42:00 BST

Modelwidow said…
What a lovely cowl, thank goodness for Ravelry, it's amazing how many times we would miss a wonderful knit if we judged by the pattern photos.
Have a great break, if puss will let you go - ah bless.
5 September 2010 at 12:54:00 BST

mooncalf said…
Wow - you're so organised. And so generous to give such a gorgeous cowl away.

I never want to give away things I make if I really like them and if I don't really like them I feel bad giving them away in case the recipient feels the same. gah!
6 September 2010 at 12:33:00 BST

Rachel said…
It's beautiful...especially in that soft, sky blue! I thought I was doing good by having made a list of what I was going to do for Xmas in the knitting department...but you are putting me to shame!

Mary said…
Oh gosh, you are so organise and the cabled cow is lovely. Great yarn choice too.

Bells said…
you filled my ears with alarm - CHRISTMAS KNITTING!!!

But it's good for me to start thinking.

I love that cowl. I'm not usually into the cowl but lately i'm seeing some value in them and the snuggly cleverness of this one is very appealing.
8 September 2010 at 10:55:00 BST

raining sheep said…
I love it. It is beautiful. The pattern is perfect and it looks so snuggly. Something like that would be perfect for our nasty canadian winter.
9 September 2010 at 05:04:00 BST 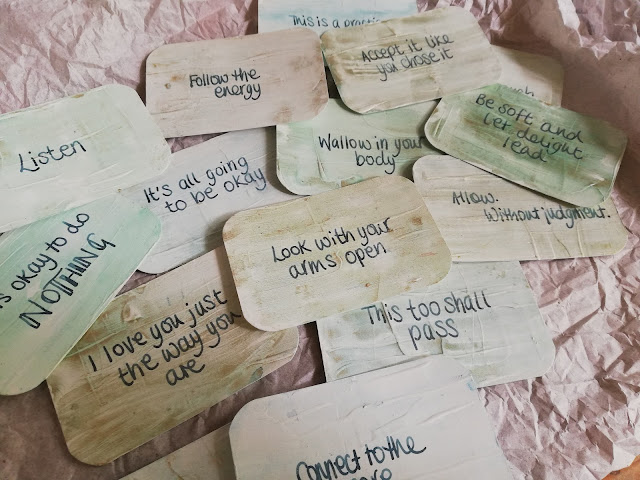 I think a lot about what it means to listen. To listen to our selves. Do you hear conflicting things? I feel like moment by moment one self speaks and then the next. I assign them names: heart, ego, Nigel. Physical personas: wise woman of the woods, puppy,  unicorn. Sometimes they come together in a wise council. Of course I like them to be sitting around a round table, a la the Knights of Camelot, or gathered in a meadow, held within a fairy ring. More often they seem to wandering around on their own, just saying confusing things.  I say that the heart or soul voice is quiet but is it? Is it actually just overlaid by distractions. Its messages this year have been consistent: be soft, go gently, let delight lead, sit quietly, look around you. Often it feels in conflict with what the world asks of me. Or more accurately what I believe the world is asking of me. What I interpret. What I'm conditioned to believe. I'm making a series of little cards to capture some of what I hear t
Read more