- December 30, 2009
I'm home again and happy as can be. So much fun has been had over the last week and a bit and the gift knits were actually done in time! (Well almost). 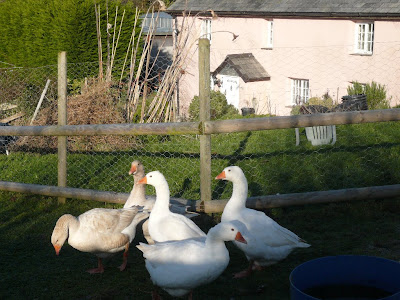 It seems that I took next to no photos of Christmas down in Cornwall with my family but here's a suitably Christmassy shot in a rare patch of sun - though I should point out that these are pet geese that didn't get eaten :)

The last two knits on the gift schedule were both socks and were both nearly there by the time I caught the train on the 19th. I thought I had finished these Angee socks off on the way down and was very happy with that as they were for my Mum and so not the easiest thing to knit at her house. 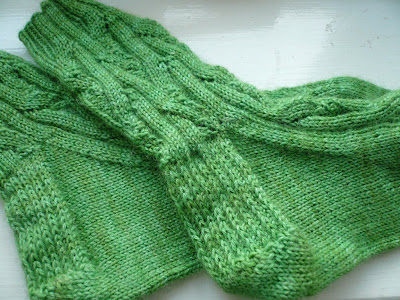 I was so excited to start these back when I first got my hands on Cookie A's book but I did not love knitting these as I never 'got' the pattern and had to check the book all the time in the most annoying way. I should have abandoned them early on but stubbornly carried on and it seems I was so keen to finish them that I miscounted the pattern repeat and made the second one about an inch short! So these were the almost about the finished knits - I gave them to my Mum like this which made her laugh at least and fixed them for her once she was allowed to see them. 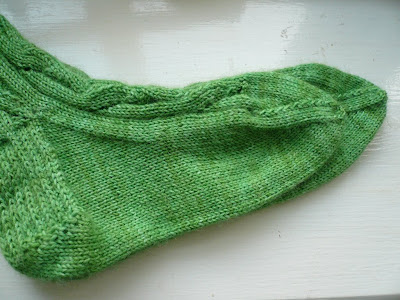 These socks were actually properly finished in time and were very well received by my Auntie. She was first on the list for Christmas socks as I made her some Jaywalkers last year and she loved them so much that she hasn't worn them but keeps them with her mementos! It's lovely when the work in gift knits is appreciated - but I made her promise that she will wear these! 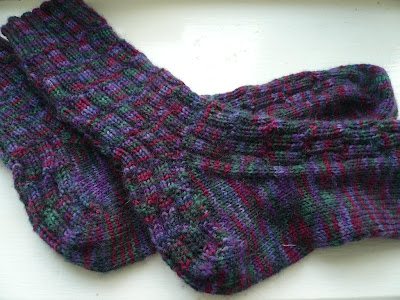 Thank you all for the comments and good wishes on the last post - hope your celebrations went with a swing and all missions for fun and frivolity were accomplished!
made by me

Rose Red said…
Lovely socks - lucky mum and auntie! So funny you made the Angee socks too short, I'm amazed that hasn't happened to me at one time or another!!

amanda said…
lol at your different length socks - that's what happens when you're so eager to finish! Reminds me of when I'm measuring my work and I convince myself that yes it is really 12 inches long at the 10 inch point. :)

sheep#100 said…
Really love the colorway on the Coloseums.

DrK said…
i agree re the cookie book, lovely ideas but difficult execution. yours look lovely tho and im sure they are being very much appreciated right about now!
1 January 2010 at 05:58:00 GMT

Anonymous said…
LOL at your aunt not wanting to wear her socks. I hope she wears these ones. Knitted socks are just so fab to wear. Love both pairs. Love the yarn for the Colosseum socks. Really keen to knit myself a pair as i'm desperate for more socks.
6 January 2010 at 16:52:00 GMT