- November 26, 2009
Why is it that some crafty techniques are easy and some difficult? Why are some easy for one and difficult for another? Who owns the scale that says what is easy and what is not? 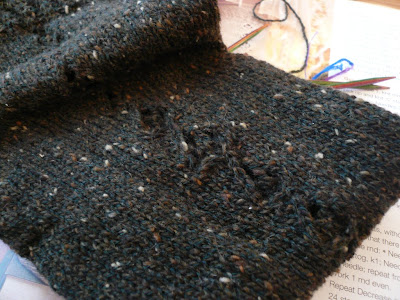 When I was on holiday I finally got around to cabling without a cable needle. I've often read of people learning to do this but never quite had the impetus to take what felt like it would be a plunge myself. I thought it was an advanced technique and one that I wasn't sure I would ever bother with. I'm not the world's speediest knitter and have never really minded the extra time involved in using a cable needle.
While travelling my main project was the Over the Knee Stockings from Handknit Holidays which has one fiddly cable every ten rows as part of the gorgeous seam that runs up the back of the leg. Part of my getting my knitting on the plane strategy is to avoid taking metal needles in the hand luggage and I thought I could just use a spare DPN as my cable needle, which I did for a while, but it was cumbersome because it was so long and the stitches are so few and I started to think about the fabled cabling without a cable needle. I decided I'd make the effort and look the technique up online and give it a go, following a video tutorial has helped me often in the past and is the best substitute I can think of for having a real live person teach you how to do something. Then it occurred to me that actually all it takes is slipping the stitches off the needle and rearranging the order you knit them in, shuffle shuffle and away I went cabling without a cable needle. Not at all difficult although I had built it up to be so.
This reinforced for me that often it's just mind over matter and that sometimes I label things as difficult for no greater reason than that they are different or new. So when I sat down with Alicia's lovely ornament kit, I felt sure I'd whip straight on with some blanket stitch before I had a chance to think it could be hard. Goodness I think I even knew how to do this when I was at school. 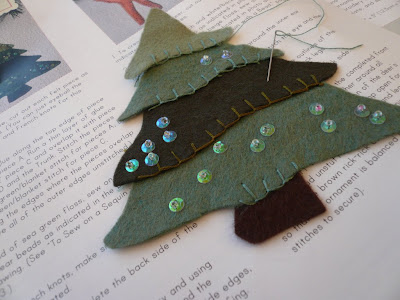 Ha ha - easy? No! Difficult? Yes! I still don't know why but it took many attempts (with knitting rest breaks to restore calm) to get my head round this which is no doubt a basic stitch in the great stitch grading. Still one easy, one difficult, whichever way they come to me , that's two more skills for the emporium!
This is not easy or difficult (except to resist casting on another pair of socks!) This is loveliness in the sunshine. It's my prize from Bells' recent give away. Thank you so much again Bells - I like to think it brought a little bit of the Australian summer with it! 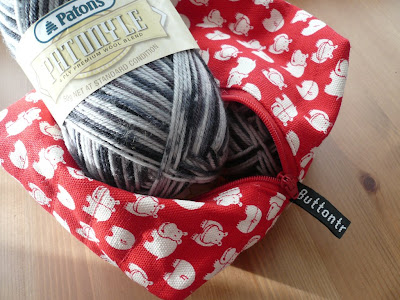 Finally, Happy Thanksgiving to anyone celebrating and to anyone who's not but still is very thankful for all they've got. A big thanks from me for everyone who commented on my blogiversary post - cheers my dears - prize drawing this weekend so last chance for anyone who hasn't got their name in the hat.
yarnery

marycatharine said…
That's an interesting question... it's like the difficulty ratings on Revelry - almost all of them are easy but easy for who?
26 November 2009 at 17:07:00 GMT

Bells said…
i was just thinking along these lines myself last night as I tackled my first ever nupps! Really not as hard as I'd built them up to be in my mind - but cabling without a cable needle? Now that's still on my hard list - even though I think I know that really it won't be. It's just making that leap into new territory that's tough.

And you are most welcome! Will look forward to seeing what you make of the patonyle. I made a pair of socks for Sean that he loved from the same yarn.
26 November 2009 at 19:47:00 GMT

raining sheep said…
Love the little ornament. It has that folksy look I so love. I too sometimes don't want to try something because it seems kind of hard or tricky....like learning to knit socks...and then you do it and realize it is not so bad and you can't believe how you could have held out so long.
26 November 2009 at 20:54:00 GMT

clarabelle said…
'This reinforced for me that often it's just mind over matter and that sometimes I label things as difficult for no greater reason than that they are different or new'. I reckon this sums up things for ANY knitter, however long they've been knitting. Some thing are easy and some things are difficult. End of story!
26 November 2009 at 21:30:00 GMT

Rose Red said…
I think each knitter sets his or her own difficulty gradings, partly from their attitude and partly from their natural aptitude. For me, I've found just giving things a go (when I was formerly scared of them - like fairisle) was the best way to go, and mostly I surprised myself!

I LOVE to cable without a cable needle (although I still use one for really wide cables, anything more than 4 stitches!). Don't know if it's faster, but it's easier, I reckon. Hurray you!
26 November 2009 at 23:12:00 GMT

Kelly said…
Isn't cabling without the extra needle great? I finally learned it when I had a really complex cable pattern that only gave the directions that way. I did exactly what was written, and miraculously, it worked! Since then I haven't looked back - it seems more intuitive, especially working cables from charts.

Love the ornament. Very cute! I've done oodles of blanket stitching in my time, but still find it can be a challenge to make it look even.
27 November 2009 at 02:20:00 GMT

Got It From My Mama said…
Great post I have been knitting for fyears but was totally unaware that you could cable without using a cable needle. I must try it your instructions seemed easy to follow.
27 November 2009 at 12:36:00 GMT

Linda said…
I love the felt tree, you did well to make it so beautifully!
I can only cable without a cable needle with fat yarns, if it is DK or thinner I end up losing the stitches.
27 November 2009 at 14:10:00 GMT

Charity said…
I've always imagined cabling without a needle more complicated than it's worth, but I may have to give it a go! I have Alicia's kit, too, and have been waiting for the right chance to pull it out and work on it. Your blanket stitch is lovely, even if it was a bit of a nuisance! :o)
27 November 2009 at 23:19:00 GMT

Rachel said…
I was scared to try cabling without a needle for the longest time too...and like you, didn't really mind using one anyway. But then I knit a Koolhaas for me (yet to be blogged) and figured this was the project to learn it. Easy peasy!

dreamcatcher said…
Your blog has been reviewed on the Simply Knitting blog :-)

Have to say I love the little sewn ornament! Cabling without a cable needle still eludes me. I find if stitches are off the needles they want to unravel themselves!
28 November 2009 at 16:24:00 GMT

sheep#100 said…
I think it's just inter-knitter variation - just like with non-knitting stuff. Some people just find certain things so much easier than others or so much more difficult than others. It just is.
29 November 2009 at 00:05:00 GMT

~ The Jolly Bee ~ said…
You sound a lot like me....I think I'm pretty smart, but every time I launch a new project, I realize just how dumb I am. I struggle over things that should be easy. Blanket stitching -- hah. I can barely do a straight running stitch.
29 November 2009 at 02:54:00 GMT

DrK said…
oh scrummy selfstriping patonyle. best sock wool ever! and im cheered by this news about cables. i have never done one, for fear it must be hard, but im starting to think maybe not...as for sewing, gees, lets not even go there!!
30 November 2009 at 03:05:00 GMT