- June 08, 2008
...and it's on to the third block of Project Spectrum. If I could just find where April and May and the Earth section went then I think I'd be ready for Air. I never quite got into gear for the greens, browns and metallics though I did manage Mr's socks: 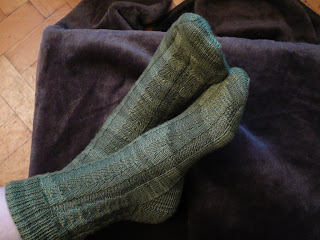 I love the Air colours of grey, yellow and white. Grey is the staple colour of my wardrobe and when I cleaned it up the other day I was a little scared of the number of (bought) grey cardigans I have.

I'm still to knit one myself and don't foresee one appearing in the next two months either. My plan is that grey being so close to silver I am just going to roll over the main project for Earth - the Patons Spritz Cloud Bolero. I'm actually glad I didn't get round to this as Ysolda is working on an update to the pattern to be sold called Liesl which sounds like fun as it includes variations on the original. I like to think of this as my reward for trying to knit up some of the WIPs and not starting too many new things.
The newest of my knits, and current faves because of their total simplicity - the Rainbow Socks (knit in Regia Nation 5399, Mrs J) are a wonderful PS knit as I could have claimed them for Earth had I been speedier but shall call them Air for this vivid yellow when they pop off the needles shortly. 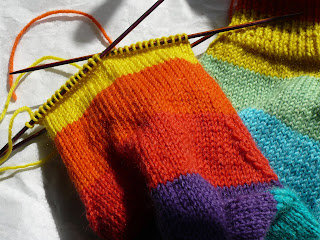 I've just signed up for another KAL which I'm going to wrap into Project Spectrum. After reading about the Tour de France Knitalong at Bells' I thought a nice snappy month long event was just what was called for to inject a bit of energy into proceedings here. I'm all signed up on Team CSC as a Yellow Jersey contender - perfect for PS you see. 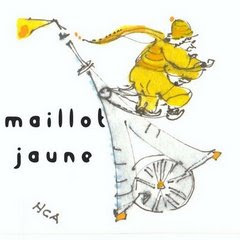 My French themed project will be a beret, naturellement, it's all Ysolda patterns here at the moment - have loved Verity since I first saw it and this seems like a great reason to knit her.

I'm glad for the enjoyment my pics from Oslo brought, hard to believe it was only a week ago I was there. I'd really recommend a visit to anyone if you get the chance. That wonderful house in Frogner was sadly not mine in the sense I stayed there, just mine in the sense I want it to be my home in Oslo. Though I could make do with this apartment if need be ;o) 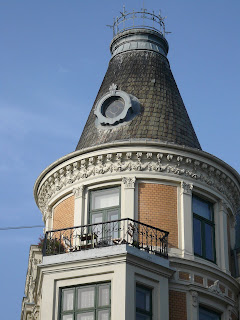 Ambermoggie, a fragrant soul said…
totally failed on PS also so you aren't alone:)
I love the regia yarn I made Mr Mog a pair of socks in that. The yarn was donated by Ruth for his 2 months of daily radiotherapy and it didn't half make the nurses smile each day:) A very cheery yarn full of sunshie
8 June 2008 at 13:13:00 BST

Bells said…
yay! You've signed up! Yipee! And a beret! What a fabulous idea.

I share your love of grey cardigans. Not that I have any. I do have a tonne of grey earmarked for one. It's funny, when I thought of making one, I thought, oh now, people will think it's so plain to wear a grey cardigan. But now I don't care if they do. Grey is just the sort of colour to go with other things.

Marianne said…
Yeah, I hear you, where DID April and May go?

Funny.. I have several grey sweaters (wool ones found in thrift stores :^).

raining sheep said…
Wow. Good for you for having all these knitting plans..I started some socks a while back and am struggling to get them completed. I don't thing anyone can have too many grey sweaters! :) And, of course, being a bit of a flower fanatic, I love the yellow rose is your post. Fantastic picture.
9 June 2008 at 14:37:00 BST