- March 03, 2007
In preparation for Moonlight and Flair I've been clearing the knitting decks today. I finished off the teapot stand for the kitchen: 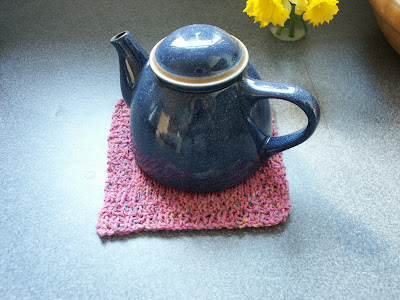 Learnt how to do the cabled cast on for this and it's my first bit of double moss stitch. Every project brings me new skills at the moment which in turn brings a great sense of achievement in the simplest of objects. 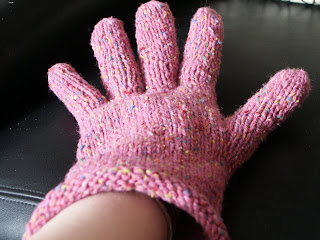 I've no idea what happened here as it is the right gauge and yet the glove that should fit me, fits my 1TB who is 6ft5in and definitely does not have the hands of the average woman! He did say he'd wear them in this fetching shade but he doesn't like the style that means it doesn't fit snug around his wrist. I would try them in another yarn but they are knit flat and then seamed which seems wrong for gloves. I'll look out for a similar style knit in the round I think.

This yarn is lovely but sadly I have no idea what it is as it came as part of a mixed lot with no identity tags. I think it's a wool/acrylic blend but I may be hopelessly wrong on that.
Another UFO that has bitten the dust is the River Scarf. This was a plain garter stitch scarf, which I was going to liven up with a patterned panel. I started this when it seemed this may be my creative limit but with so many options open to me now there is no way I will return to this, so time to say farewell. 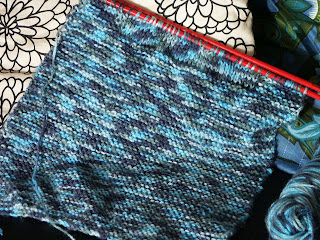 I don't think it's going to be all jumpers around here though as I seem to have amassed some other rather lovely yarns just recently and with Charlene to hand am looking forward to getting some lovely socks going alongside the bigger projects. 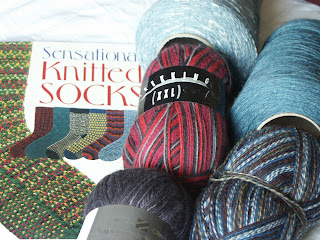 The cones of yarn were a bargain (of course ;0) from ebay. The darker of the two is machine washable wool by King Cole in Drift, the lighter Yeoman Husky Yarn which has pretty white slubs running through it. The Trekking XXL (shade 1671) came from ebay too from Yummy Yarns along with the ball without a band which is Lana Grossa Meilenweit Colortweed. I've read and heard a lot about these yarns on blogs and podcasts so I'm keen to see how I get on with them.
-
The last ball in the pic I got today at Masons which is a FAB yarn shop in Abingdon (just south of Oxford). I saw it mentioned in the Angel Yarns forum the other day and when my friend from work said she was planning a trip today I had to join in. I somehow escaped with just this yarn and a smidge of ribbon for the waistcoat closing as I'm trying not to buy anymore yarn until Flair and Moonlight are done (or well on the way at least!). 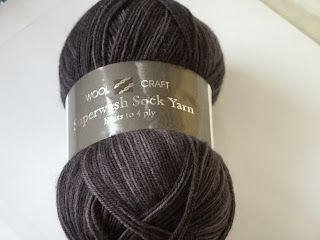 Here's a close up of it as I'm particularly intrigued about this one; I've not heard it mentioned elsewhere and it looks to be great value at just £3.30 for 100gms. I'd love to know if anyone else has knit with this?
I shall definitely be returning to Masons. They have a great range of yarn, with everything from the designer brands, the more budget choices, lots of brands I hadn't heard of and even some locally sourced alpaca. The staff were lovely, it's combined with a great fabric section and is everything you would want from a LYS - hooray!
-
Well this is a mega post but I just want to finish by saying that Cucumberpatch were brilliant once again with my order for the Rowanspun Aran for Moonlight. I ordered it on Wednesday lunchtime and it arrived on Thursday morning, can't ask for better service than that can you?! 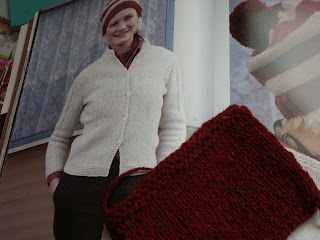 I've swatched on the recommended 5.5mm needles but am slightly out - am hoping 5mm needles get the right gauge as these are my Brittany Birch needles and I would love to knit a big project on them.
--------------------
Am off babysitting tonight and hope the children are sleepy so I can get some work in on Horace and sweep the decks thoroughly clean!
yarnery

Glenna C said…
i love the Sensational Knitted Socks book! She has a 2nd one out now too that I want to get eventually. I have a couple of projects from the 1st one waiting in the queue ;)
4 March 2007 at 14:58:00 GMT

Artis-Anne said…
Oh you have some lovely yarns there; sorry don't know about the one you mentioned but again a lovely colour . As yet I don't possess a sock book, maybe soon if I am not socked out :)
4 March 2007 at 15:10:00 GMT

Kelly said…
Wow, it sounds like you have lots on different projects on the go and waiting in the wings (I can relate!).

I'm sorry to hear about your gloves. It's painful to put in so much work and have an unusable product. I would agree with you though that knitting gloves flat and having all those finger seams is really not worth it. Go for in-the-round ones if you can.

I have to say that sometimes the bargain sock yarns wear better with less pilling than the fancy, pricier ones. Wouldn't it be great if you've lucked into a really good, affordable one? I love all the colours in your new sock yarn stash. Happy knitting!
4 March 2007 at 17:26:00 GMT

artyfartykat said…
You've bought some yummy yarns, you'll have to let us know how your bargain sock yarn knits up!
You should try felting your gloves if theres enough wool in them, tho they'll probably end up too small then!!
4 March 2007 at 19:18:00 GMT

acrylik said…
Marvellous sock yarn haul there :) Do let us know what you think of the SKS book when you have a chance, as I think I might be interested in buying that one ;)

I agree with artyfartykat, if there's enough wool in the gloves, try hand felting them and see how that turns out.

Sarah said…
So many lovely yarns! The teapot stand is lovely and the photo is very well styled!

Elaine said…
I really want to know how the Trekking XXL turns out. Keep us posted!

Also I agree with you about the service at Cucumberpatch. They are really speedy (and responsive) even with international sales to Australia.

Marianne said…
It looks like you could knit the mosaic socks looking at your new yarns, maybe? I hear the mosaic patterns are fairly addictive....
I'm with Kelly on the bargain sock yarns holding up better, at least some of them do for sure!
5 March 2007 at 14:57:00 GMT

Craftydramaqueen said…
The Lana Grossa Colourtweed is fab to knit with, except, I tried to get my socks to match, and they do, up to the toes! Tumble dry the gloves, it might work!
7 March 2007 at 19:52:00 GMT