Sometimes there are signs...

I should take these things to mean stop knitting and get to bed. Instead I took them to mean, just push on through the decreases you can graft the toe tomorrow. Next thing? Stitches jumping off the needles like lemmings off a cliff.
Eventually it became clear that a new day was going to be the only solution to resuscitating the lemmings.
That was last night, tonight the signs were strong so feeling like a wise white witch I took note and thought I'll photo the mess and blog about it instead, a nice substitute for knitting itself.
Here is the photo: 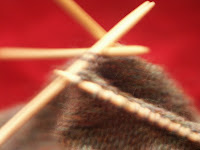 Or maybe this one: 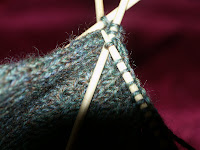 And yet did the wise witch feel the way the wind was blowing, nope, onto blogger I hopped and I've been fighting with it ever since.
Sometimes bed is the only option!
yarnery

Sarah said…
I tried to knit in the car in the dark the other night and only discovered the mistakes I'd made the next morning. It is just so hard to stop!
6 January 2007 at 18:27:00 GMT