Showing posts from January, 2007
Show All 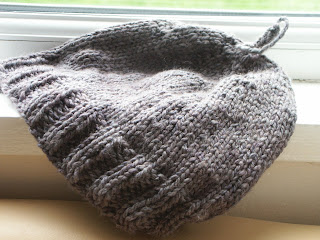 So the labour of love is done and the ITB will have a warm, snuggly head. The close up below is to try and show some of the colours in the yarn, some deep purples and almost greens, but its a dull grey day today and they're not really glowing like they do sometimes - there is a better representation of the colour at the link below. I'm really pleased I persevered with this, having finished it the second time the inclination was just to say, oh well it's not great but it's done. However the fact that this was special yarn and a present meant I ripped out to do it properly. It was a quick project to knit and it really proved to me that it's worth taking the time to get something you're really happy with.

Not so much toe-up as top down 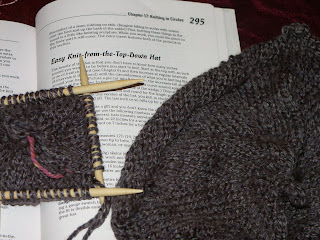 No toe up sock knitting done this weekend after all as the skein has proved a little tricksy to wind into a ball. I tried on Friday night but had to give up and do something less likely to get launched across the room in a fit of pique. It's been so naughty that I've left it at my sort of MIL's who loves a good challenge to finish the winding process.

The less frustrating project selected was the top down hat for my 1TB who as yet has no knitted love to show for my new obsession. Best that he gets something soon I thought or the comments about the growing yarn mountain may become more frequent.

Here is progress so far - yes that is a complete hat on the right which I am reknitting into the third attempt! The wool/silk blend is very chunky and soft and I completely misjudged the sizing first time round and made a beret - the opposite problem from the kufi situation Grumperina was in recently, I'm pleased to be in good company! I ripped back and cut down the second attemp…
5 comments
Read more I fear my brain may overload with all the knitting buzzing around up there right now so time for a bit of a download to the knitting ideas overflow depository, this is probably very boring for anyone except me so do feel free to look at the one pretty picture and pass on to more exciting pastures. Come back soon though I even sometimes knit actual things!

Big excitement as my HipKnits sock yarn arrived yesterday - ooh ooh see how beautiful it is?

I'm holding off knitting with it until tomorrow night when I feel I will be able to sit calmly with a cup of tea and Wendy's toe up sock instructions and let rip/falter along getting in a right pickle.

I've been trying to gear up to start work on the shapely tank top I've been dreaming of for weeks but my plan to use some Silk Garden I have for it is feeling a bit ambitious for my first big project. It's knit up at quite a different tension from that recommended for the pattern which is not surprising as it is quite a bit th…
9 comments
Read more 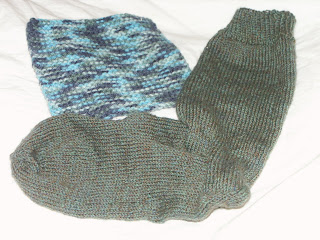 Oh why is there so much life to get in the way of knitting?

So little weekend knitting was done as a lot of tiling took place, still I have a bath again - yey! Shower is just waiting on getting the grouting done but I feel like we're in the home straight with that now. 1TB and his Dad are putting together a kitchen as I type so progress there too. At least I shall appreciate it when both rooms are done - thank you all for the moral support. It's really not been too bad (keep repeating to self to stay sane).

I did finish up the last of the Christmas presents last night, so here's another photo of a green sock! I promise a rest from this yarn now. It's nice feeling to have the guilt projects done with - will start earlier this year! Also got my Water Aid square done on Saturday - can I claim that as a FO? - hey why not it's only me who's counting and 3 months ago I couldn't have even done that!


Some non blog posting to do tomorrow I think. Talking of which I hav…
4 comments
Read more

The Week in Knitting Well it's certainly been an interesting week. No bath, shower or cooker - ah the joys of DIY and the foolishness of doing your kitchen and bathroom at the same time! Still thankfully through it all there is knitting to keep me sane.
The last very overdue part of the Christmas presents is getting there and should be finished by the end of the weekend (I hope). This is great wool but two pairs of plain socks in the same yarn has tested my short attention span somewhat. A bit of Water Aid square and the fun of creating a glove have helped to keep things moving along.

An exciting parcel from Hong Kong arrived on Tuesday with 12 lovely sets of bamboo DPNs, sizes from 2mm to 8mm making socks in varying weights of yarns now possible. This were just the best bargain ever - £10 for the whole lot, hurrah and thank you Joyce :0) Dreaming of some cosy bright knee highs and have got some fabulous looking sock yarn on its way from HipKnitswhich I am VERY excited about and which I think I'm g…
9 comments
Read more 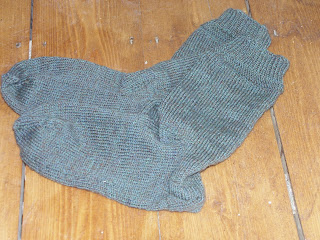 Today I finished two projects - hurrah! One is slightly more successful than the other I have to say. Luckily it is the gift that has triumphed.

Here are Dad's Christmas socks finally finished. I'm pleased with how these turned out, I'm getting better at this basic pattern and can even even see the difference in speed and confidence between the first and second of this pair.

The wool is part of a batch of old Patons Purple Heather I got from ebay and it is just perfect for socks, feels like it should be hard wearing, not the cosiest socks but good for some tough love which I know my Dad will give them. I think I used about 3 balls - about 60 grams for the pair.

I put a double line of reverse stocking stitch in at the top to distinguish these from the other Christmas socks for my friend in the same yarn and I like how this looks.

I am really enjoying sock knitting and think they will become a particular passion of mine; can't wait to try some toe-ups and something with a pa…
10 comments
Read more 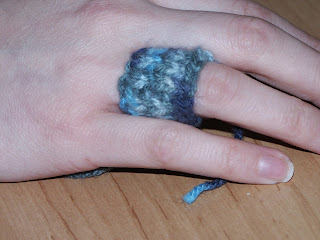 So this rollercoaster ride that is my knitting learning curve continues.

On Monday feeling that the Dad sock was going well but was an itsy bit tedious and would benefit from a teensy break while I started something else, I tried to get going on the hat for the one-true-beloved.
I had bought the gorgeous silk/lambswool yarn in San Francisco with this in mind, but I knew it was too thick for the pattern I had found. So I read some of my Christmas books for advice and concluded if I got the right size circular needle I could alter the number of stitches required. Needle duly ordered I thought I would make a test version using some yarn closer to that recommended. I knit a swatch and decided it was close enough, especially as right after I smugly swatched thinking I was oh so virtuous I read a big thing about how getting the gauge right on circular needles is much harder....
So then I cast on 72 stitches, thought mmm how pretty and knit the first row..... anyone spot what is coming next? Ho…
7 comments
Read more 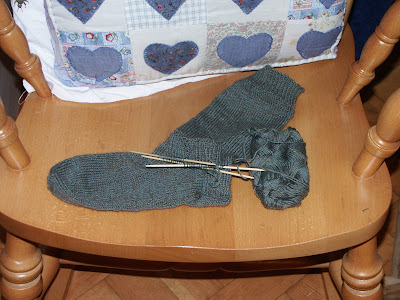 See how Dad's number one sock that was behaving so badly is finished and feel my happiness!

Also the little scarf I did last week: Feeling so happy in fact that I stole the percentage bars from Glenna and did some blog editing too. (Whew learning about blogging makes knitting seem easy.)
Lesson learned - some days things go badly, some days they go better - in knitting as in life!
Doesn't mean I've finished all my Christmas knitting for 2006 by 7 January 2007 though does it? Maybe the bars will spur me on and stop me casting on for a tank top for myself....
7 comments
Read more

Sometimes there are signs... ...such as yawning, scratchy eyes, a general weariness.

I should take these things to mean stop knitting and get to bed. Instead I took them to mean, just push on through the decreases you can graft the toe tomorrow. Next thing? Stitches jumping off the needles like lemmings off a cliff.
Eventually it became clear that a new day was going to be the only solution to resuscitating the lemmings.
That was last night, tonight the signs were strong so feeling like a wise white witch I took note and thought I'll photo the mess and blog about it instead, a nice substitute for knitting itself.
Here is the photo:

Or maybe this one:
And yet did the wise witch feel the way the wind was blowing, nope, onto blogger I hopped and I've been fighting with it ever since. Sometimes bed is the only option!
3 comments
Read more

- January 02, 2007
I forgot one of my knitting Christmas presents! Shame on me as I was super excited when I opened it as it's the Knitting Pattern a Day calendar I was busy ogling pre-Christmas.

Two days in and I already want to make both patterns, the angora scarf from yesterday is also making me want to buy that exact yarn - I can see this will keep me busy and poor!

The crafting party was great yesterday did some sketching and paper making as well as knitting, hence no finished scarf to show today despite it only being ten stitiches wide! Hoping to finish it off tonight during This Life, very excited about this one off return to one of my favourite all time shows, almost makes up for it being first day back at work!
6 comments
Read more 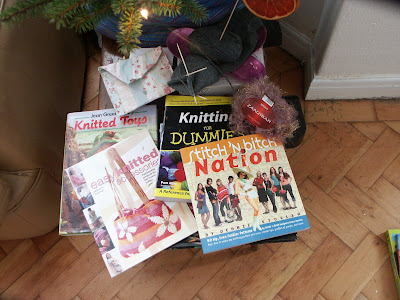 It is a glorious, blue skied crisp winter day here in Oxford - a perfect start to what I hope will be a wonderful year.
2006 has had its ups and downs but on the whole it has been really great - we said farewell in style last night with a small group of friends and, as it should do, that final memory for 2006 casts a golden glow over the rest of the year.
2006 will go down in my history as the year that I took up knitting and found more than a hobby. I have found a way of spending my time that brings enormous rewards in feelings of achievement and self expression, a means of making gifts that people love (even when delivered late or in part!) and a whole community of knit sibs. Not a bad achievement for a year.
I had a lovely Christmas, suitably blessed with some knitting related gifts - mainly some books which I'm enjoying dipping into but haven't fully explored yet. My crafting auntie also made a lovely decoration for my tree and a wonderful stripey pouch (pictured) which is pe…
4 comments
Read more
More posts